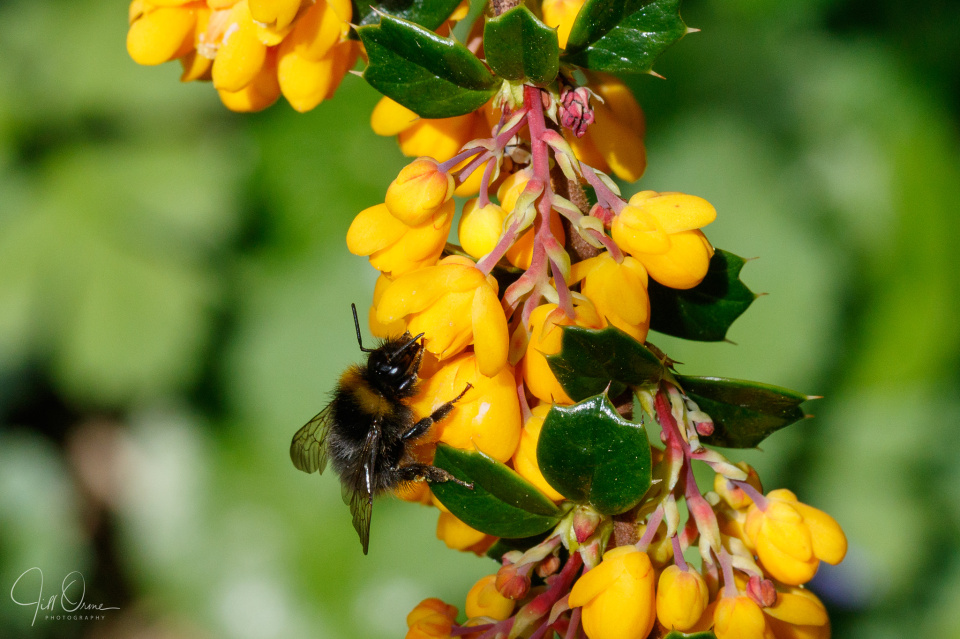 Well, not very early, actually. This is the first Early Bumblebee I’ve seen this year, whereas last year I recorded my first one on 26th March. On the other hand, we had a nice spring last year, and this season has been fairly disappointing so far, so late arrivals are hardly a surprise.

If the bee was disappointed she gave no sign of it. She was moving furiously around the berberis, and I had to work quite hard to catch up with her. I only managed two shots, the second of which was photobombed by an angry Tree Bumblebee queen, so it’s lucky that this one was in focus.The thing that was obvious on the spoiled photo, but isn’t on this one, was the small red tail that confirmed her identity as a Bombus pratorum worker. In an ideal world she’d also have a yellow band at the top of her abdomen, but in practice this is often missing; in this individual it appears to have been replaced by a sparse patch of grey hair, though I suspect this is actually just a smear of dust or debris that she’s picked up somewhere.

Early Bumblebees are said to be bivoltine, which means that they go through two broods in a season. The queens of this generation will have been on the wing and setting up their nests last month, and males and new queens will emerge in May or June to begin the process again. The second generation will persist into September, when the new queens from that brood will go into hibernation. The nests of this species are quite small, and can turn up almost anywhere, from underground rodent burrows, through patches of vegetation at ground level, up to old birds’ nests.

The other notable thing about Bombus pratorum is that it’s a short-faced species, so prefers to feed from open flowers such as geraniums and bramble, rather than from flowers with a tubular structure. I have a lot of blue geranium growing in my garden, and the male Earlies, which have lemon-yellow collars and belly bands, red tails, and bright yellow faces, look especially striking as they flit around among the purple-blue flowers.