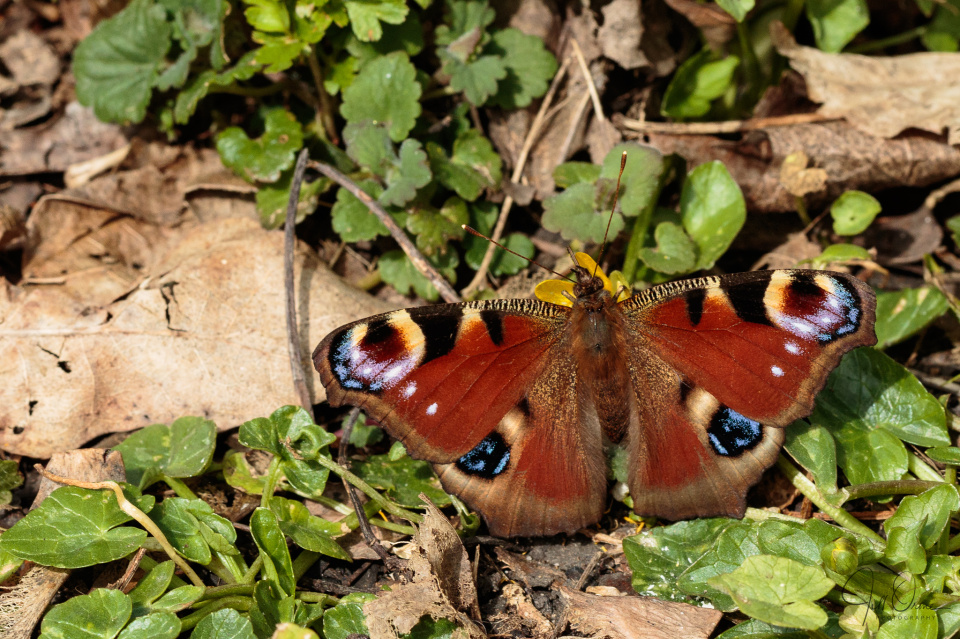 It was a little cooler this morning, and R and I levelled the pond and infilled around it, before (yay!) filling it with water. After examining the contents of our water butts, and taking advice from a local wildlife photographer (and pond owner) of my acquaintance, who commented on yesterday’s post on Twitter, I finally decided to use mains water. I won’t be able to order any more plants until after Easter anyway; by the time they arrive the chlorine will have evaporated, and the plants themselves should deal with any excess of nutrients in the water. Tomorrow I’m planning (back and knees willing) to do a little landscaping around the area, to hide the edge of the plastic liner and make it look more natural.

While we were working, the wild garden was busy with male butterflies, patrolling in search of mates. At one point we had three Orange Tips fighting, and over the course of the morning two Peacocks, a Brimstone, a Speckled Wood, a Holly Blue and an unidentified White zoomed through at regular intervals. I very much wanted to capture one of the species I haven’t yet photographed this year, but despite my furious attempts at mind control neither the Orange Tips, Brimstone nor Holly Blue could be induced to land. The Speckled Wood came down briefly, but had disappeared again by the time I’d picked up the camera, and in the end it was only this pristine Peacock that was tired and hungry enough to settle among the celandines for a short rest and some refreshment. It seems churlish to complain though, as they’re lovely but relatively infrequent visitors to the garden – so I won’t.

The highlight of the afternoon was our weekly family Zoom meeting. Everyone is well, and keeping busy.