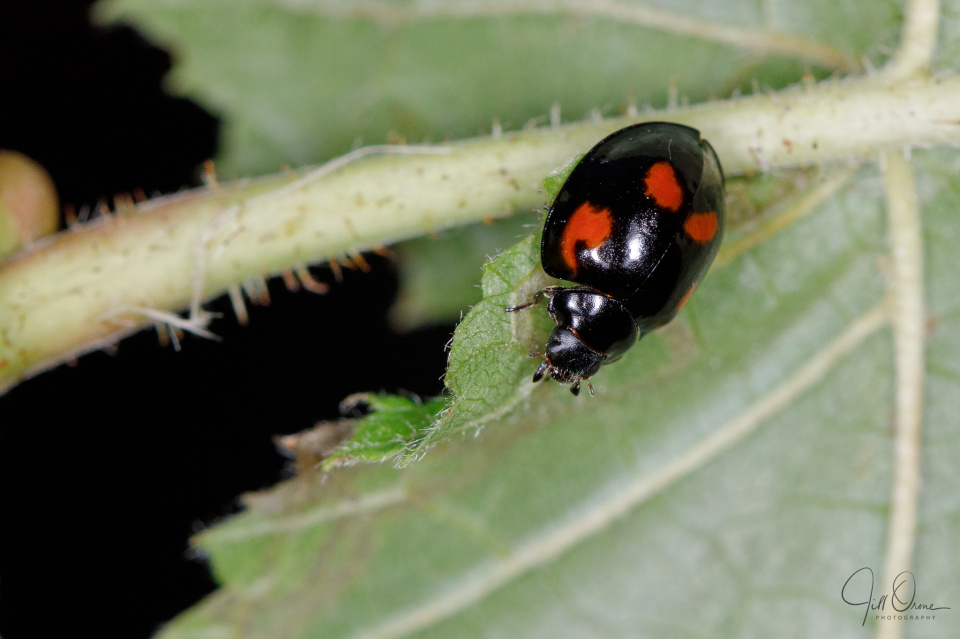 I spent most of the day doing far more useful and boring things than taking photos, and it was mid-afternoon before I realised that I was headed for trouble if I didn’t get outside with the camera pretty promptly. Given the date and the recent cold snap I didn’t expect to find many invertebrates – and nor did I – but I did make a couple of unexpected discoveries. 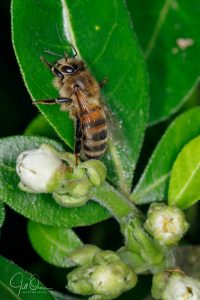 This honey bee was resting on the Choisya ternata we have in the top garden. I’ve never spotted a honey bee so late in the year before, so I was quite surprised, but this web page has informed me that there are reasons for a honey bee to leave its hive during winter, one being to eliminate waste products, and another being to collect water. Even so I’m fearful for this individual, because she stayed on the Choisya for the rest of the afternoon, and though it wasn’t especially cold when I took my photo the temperature will have dropped quite dramatically this evening. As it says on the Cotswold Bees page, a cold bee is a dead bee, and if she didn’t get back to her hive by nightfall it seems unlikely that she’ll survive the night.

I managed (just) to capture the bee without flash, but by the time I found this pine ladybird down in the wild garden there simply wasn’t enough natural light for macro photography. On the one hand this is a little annoying, because the reflections from the beetle’s pronotum and wing cases are rather distracting; but on the other, I’m pretty smug to have found a pine ladybird, which is about 4mm long and largely black, on the underside of a leaf about half a metre up from the ground, late in a cloudy afternoon on the last day of November. The fact that this is the first pine ladybird I’ve ever seen on our property is also very pleasing. The little chap was still quite active, but I doubt it will find much to eat now (its principal foods being aphids and scale insects), so I hope it manages to find a cosy corner in which to hibernate. We do have several conifers, though I don’t know if any of them is technically a pine tree, but NatureSpot tells me that the pine ladybird will use other trees and shrubs if necessary.