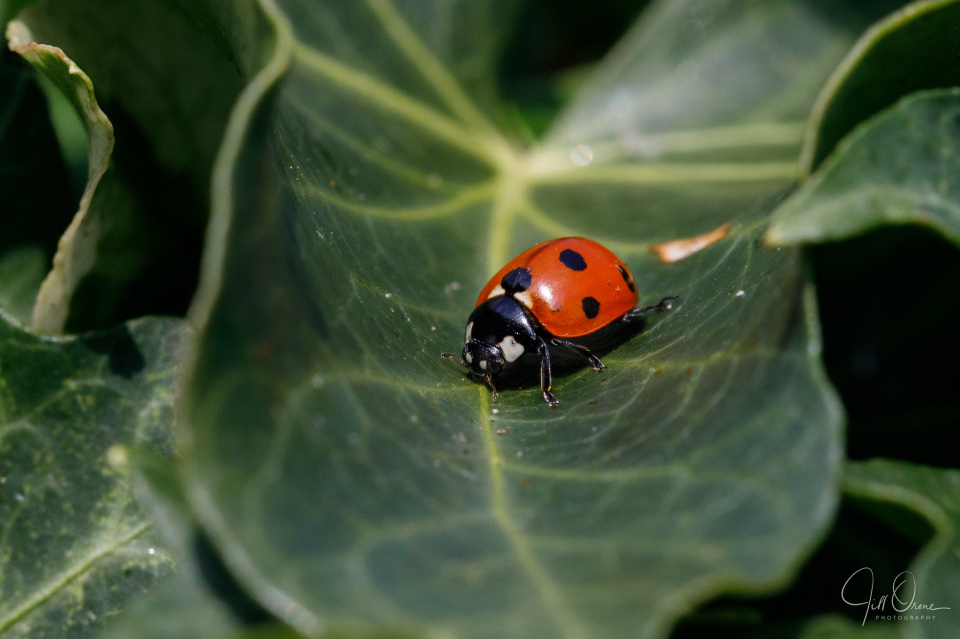 Playing a game with Baby B the other day, using his wooden invert blocks:

“Here’s caterpillar. Caterpillar goes wriggle, wriggle, wriggle, doesn’t he?” – wriggling the caterpillar block across the carpet and up onto Baby B, who wriggled himself, while chuckling gratifyingly. “And here’s butterfly, and he goes flutter, flutter, flutter. And this is beetle, who goes beetle, beetle, beetle. And here’s bee, who goes buzz, buzz, buzz. Who’s this? It’s spider – and he goes – umm… incy, wincy, wincy. And finally we have ladybird, and ladybird goes…. oh, I don’t know, something, something, something.”

“Noodle,” said R’s voice from behind me.

Ladybird (who’s still Baby B’s favourite at this point in time, though caterpillar is wriggling up fast on the outside rails) does indeed go noodle – sometimes rather too fast for the comfort of the macro photographer, I have to admit – and the problem of getting most of today’s ladybirds in reasonable focus wasn’t made any easier by the fact that it was blowing a hoolie. (“If you want to do macro,” said the chap in the tutorial I watched on YouTube this morning, “and it’s really windy, ask yourself – why are you bothering?” Well, because it’s Tuesday, and I don’t think it’s polite for the host to duck the Tiny Challenge.)

So anyway, after circling the garden for a while, adopting the spray’n’pray technique with every invertebrate I happened across (which had about a 10% success rate), and feeling that I’d just about had enough and got enough, I noticed a green shieldbug, a 7-spot, and a pine ladybird quite close together but fairly high up on the sugar-sprayed ivy on our old farm wall. It took R and me about ten minutes of rummaging in the garage to find the hop-up step, after which I hopped up and discovered that the ivy thatch was so tightly woven that the wind wasn’t really affecting it, and macro photography had suddenly become immeasurably easier. Having bagged my bug, and beetles, I then noticed this second 7-spot ladybird noodling very fast down a curved ivy leaf towards the sugar-fest, and I was in the right spot to simply stand and shoot as it approached. There’s something of the bobsleigh run about this, I think, and that’s why it’s my favourite photo of the day.