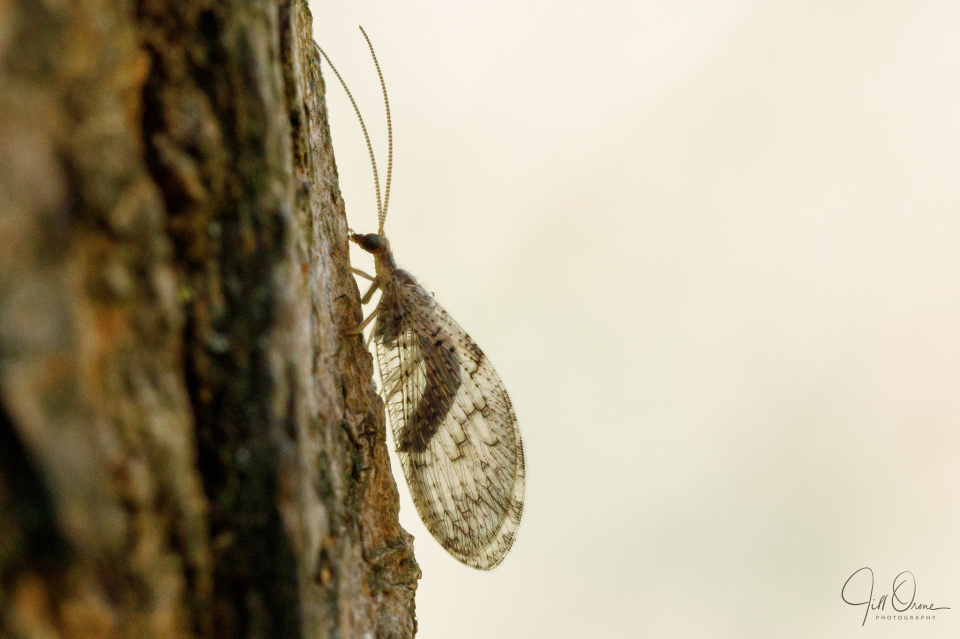 I was sitting on a tree stump down in the wild garden this afternoon, drinking a mug of tea and watching the ground for unusual movement, when something fluttered past me. It was unusual, certainly, but not what I was watching for – I wanted solitary bees or bee flies, and this looked more like a tiny moth – so I almost let it go. Curiosity got the better of me though, and I managed to track it to the mulberry tree, where I discovered that it was a female brown lacewing, which had now settled and was ovipositing on the bark.

As she was engaged in her task, and uninterested in me, I walked round the tree several times, photographing her from different angles. The photo below is more descriptive, but I find this back-lit shot more interesting because it shows the translucence of the wings. I was also able to get closer from this angle, which was helpful because she was only about a centimetre in length, excluding her extravagant antennae. 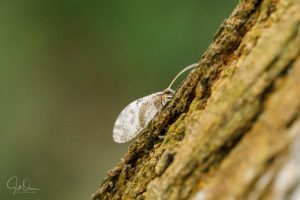 There are quite a few brown lacewings in the UK, and they’re not all that easy to tell apart unless you’re an expert – which I am conspicuously not. Nonetheless, the wing markings here are fairly distinctive, and I’m going to take a punt on her being Hemerobius humulinus, which is said to be widespread and common in hedgerows and woodland. (At osteopathy college we were taught the mantra “common things are commonest” and I find that the same rule of thumb generally applies to invertebrates as well.) As with most lacewings, both the adults and larvae are fiercely predatory, especially of aphids.

Though it was sunny this afternoon the temperature struggled to make it into double figures, and I didn’t find any new bees or bee flies emerging. My hoverfly count went up by one male Meliscaeva auricollis though, and I also found a 2-spot ladybird in the kitchen, which I successfully transferred to a little roost in the hebe where there are already two 7-spots and a pine ladybird – so the spring is progressing, albeit in baby steps.