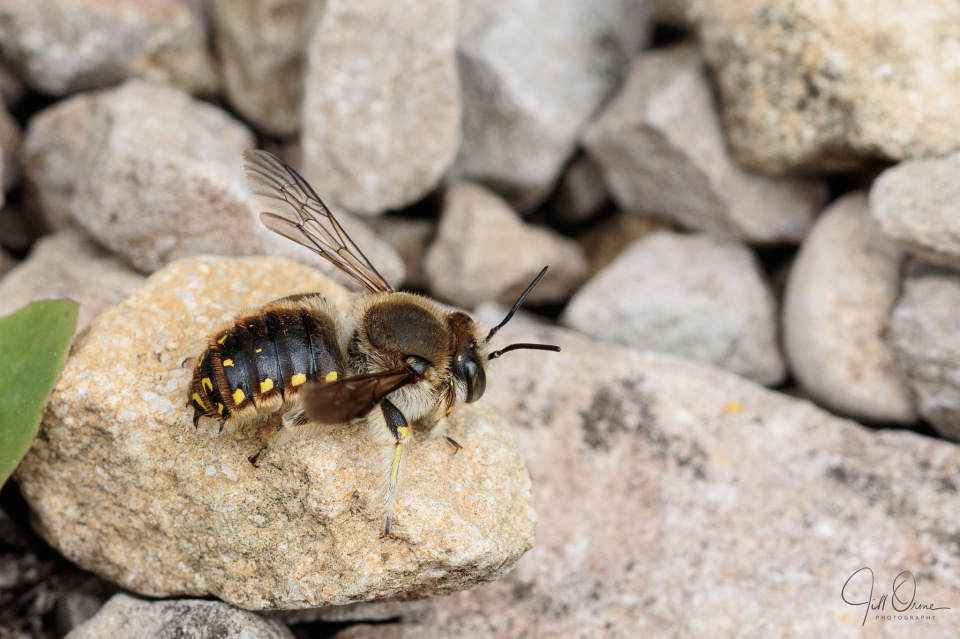 I was doing some gardening this afternoon in the yard where we park the cars – mainly cutting back some overenthusiastic grape vines along the old farm wall that I refer to as our bee hotel – when I became aware of some very cross buzzing, and realised that I was being stalked by this Wool Carder bee. Mostly he just zoomed around, in the abrupt and erratic way that’s characteristic of the males of this species, but every now and then he would settle on the gravel just in front of me, and flex his abdomen to show me the spikes at the end of it. I found this more charming than threatening, but I wasn’t about to proffer my finger to find out how sharp they are.

This is only the second Wool Carder I’ve seen since the end of June, and I’d begun to wonder if they’d deserted us, so I was much happier about the encounter than Mr Grumpy was. He’s pretty fresh, with only a couple of little nibbles out of his wings, and his aggressive behaviour suggests that he’s at least thinking about declaring our yard to be his territory. This would be very pleasing – especially if a female were to join him and nest in the wall.

If we know each other on Facebook you’ll already know that I’m celebrating a small success on the photography front today, having had two photos accepted for next year’s Worcestershire Wildlife Trust calendar. I’ve largely lost interest in photo competitions over the past couple of years, but this one is important to me because the calendar is sold to raise funds for the Trust, and I’m delighted that some of my work will be in it. If you haven’t already seen them, the runners-up, which go into the sidebar of each month’s grid, are here, and the twelve main page images are here.