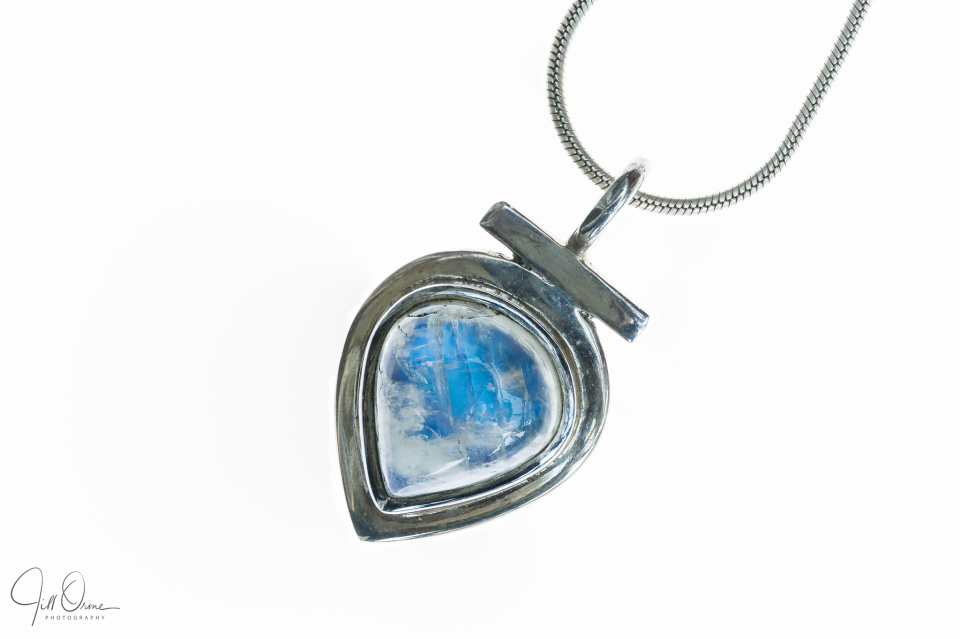 I went into the garden with the camera once today, during what seemed to be a relative lull in the weather. Within seconds the clouds opened and it began teeming with rain, which, coupled with a fierce gusting wind, made it feel as though someone had turned a fire hose on me. I retreated to the house and stayed there.

Casting around for a vaguely interesting indoor subject, I remembered that it was a while since I’d photographed any jools on the lightpad, and decided to have a go at this silver pendant, which is set with a labradorite cabochon. It’s quite a deep piece from front to back, so this is a three-layer image, stacked in Photoshop.

Labradorite is a feldspar mineral, named for the region of Canada in which it was first discovered, by a Moravian monk, in 1770. It’s also found in other parts of the world, most notably Finland, Norway, and Madagascar. A lot of labradorite is grey or black, but some pieces display a range of iridescent colours, due to light reflecting on internal fractures within the stone, and these specimens are popular as gemstones. It’s not an very hard stone though, and cleaves quite readily, so it’s not especially easy to work. Because I photographed this piece head-on, you can easily make out the flaws in the stone, but you can’t see the iridescence, which is a pale, pearly green-blue.

Normal service will resume as soon as possible, but in the meanwhile I’ve collected some shots from my bug walk on Monday and posted them to Facebook, if you’d care to take a look.