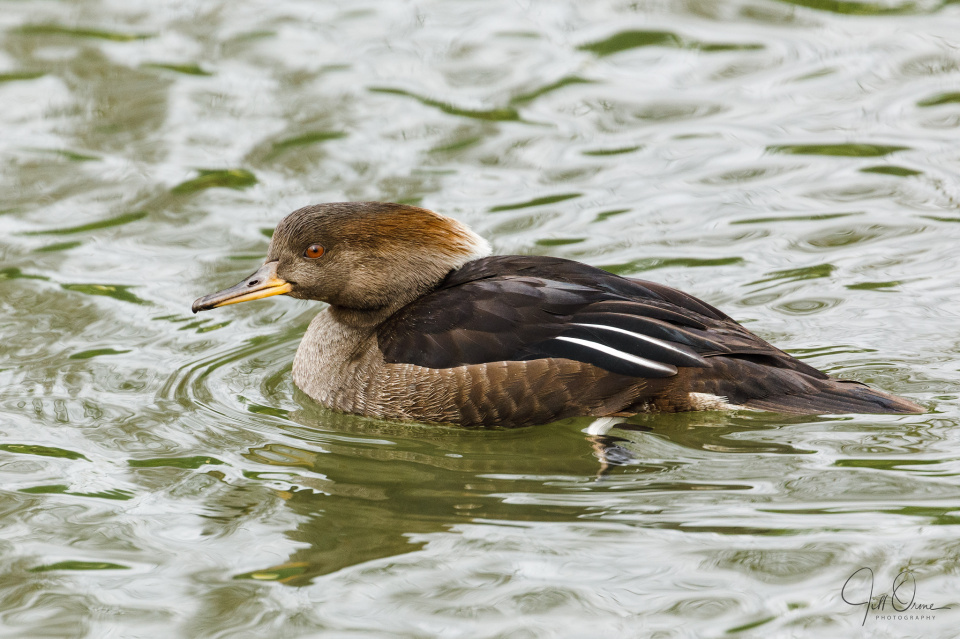 It’s been a very long day – beginning at 4am, when I managed to wake myself up in advance of my 6am alarm, and failed to get back to sleep again for an hour. I needed to be out of the house early because I had an 8am appointment at Slimbridge, to join a birding walk with one of the rangers. Our main target of the morning were the common cranes, which are getting ready to breed, but they were highly uncooperative; luckily we saw over fifty other species, and the ranger was very knowledgeable and happy to answer all kinds of questions, so it was still a valuable morning. Plus, they gave us breakfast.

After a bacon sandwich and enough coffee to engender a slight vibration, I walked the reserve again and revisited most of the hides – just in case something interesting had turned up in the meanwhile. I managed quite a few decent photos of wild birds, but the shot I like best from today is of this hooded merganser, which is a captive on one of the display ponds – once again the 100-400 has worked a kind of magic with the light that was hitting the water, on what was a pretty drab sort of day.

The hooded merganser is on the UK bird list, but is described as “Accidental”, meaning that – apart from escapees from captivity – specimens only very rarely and accidentally stray into our territory; having said which, there was a wild bird on St Kilda in Scotland for a while last year, and two in Ireland a couple of years before that. But it’s usually confined to North America, being the only merganser that’s specific to that continent. It’s the second smallest of the sawbills, with only the smew being smaller, and as well as the smew, the goosander and the red-breasted merganser it’s also related to the goldeneye. This, I think, is an adult female, though juveniles look similar. I didn’t spot an adult male today, which is a shame because they’re quite ridiculous-looking birds – I’ll have to try to find one on my next visit so I can bring you some photos. If you’re interested, there’s an good web page on the hooded merganser here.

After Slimbridge I drove (carefully) home, stopping en route to top up my caffeine level; then, arriving back to a pleasant, sunny afternoon, I went on a garden bug hunt. Then I had a complete meltdown about politics (a question for you: can you remember a time when our senior politicians were less impressive than they are now?), and almost had to take myself off for a long lie-down in a darkened room. But needs must: with a concert looming, I didn’t feel that missing choir rehearsal was acceptable behaviour, so I gave myself a stern talking-to and went off to do battle with Zelenka. Arriving home toadally zorsted, but still managing to jump up and down in a shrieking fury like Rumpelstiltskin if anyone mentions Theresa May or Jeremy Corbyn within my hearing.

Please don’t wake me in the morning: I need to catch up on my beauty sleep. Two or three years of unconsciousness should see me right, I think.