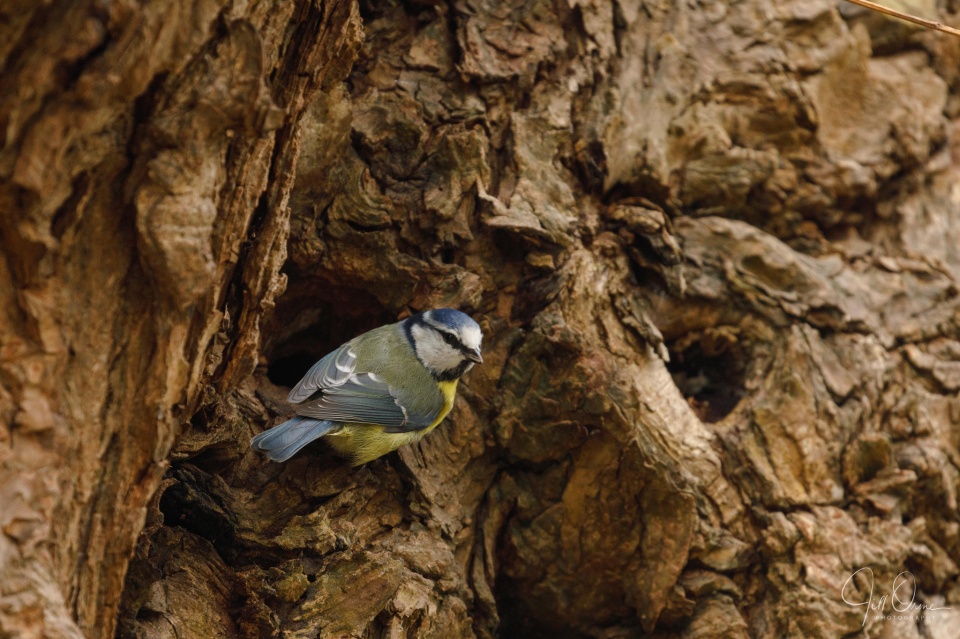 Well, it’s my own fault.

If I’d said, “Oh, no – that’s not your colour at all, and I really hate the lapels,” instead of gazing at him all misty-eyed and weak-kneed, he wouldn’t have bought it. But I cannot tell a lie; and also, I’ve always been a pushover for a good-looking man in a well-cut suit. Hence, R was able to skip blithely out of Jaeger in Stratford this morning, smugly carrying a navy slim-cut three-piece, and the scoreline currently stands at:

I’m not amused. But as we wildlife photographers (arf, arf) like to remind each other: there’s always tomorrow.

After coffee I mooched back to the car along the river, trying to hone my bird song identification skills (which need some honing, I can tell you), and spotted this blue tit checking out some nest holes in a pollarded willow. It went in and out of the hole behind it several times, but then spotted me and went to sit on a branch a short distance away, watching me. I always try quite hard not to interfere with wild creatures going about their business, so I pushed off and left it to get on with its day.

Back at home I was out with the macro, checking the verges along the lane for invertebrates, when an almighty racket started in the old orchard opposite our house. One call I do recognise is that of a little owl, so I went to investigate, and found that the owl – which I couldn’t see – was apparently yelling at a green woodpecker that was looking for grubs in the bark of one of the trees. Unfortunately the woodpecker lost its nerve and flew before I had enough time to pinpoint the noise, and the owl, of course, then fell silent.

I have permission from the owner to go into the orchard, but I didn’t want to risk putting the owl to flight, so I just walked slowly up and down the fence, peering at the trees, and taking photos of a few of the most likely-looking nest holes and enlarging them on the back of the camera, to see if I could spot the bird. I couldn’t, so I went back to my bug hunt, and it was only when I got back to the house half an hour later and uploaded the photos to the computer that I discovered from this shot that even if I hadn’t spotted it, the little owl had definitely seen me. Of course, I rushed back round there with the big lens, but by this time the owl had moved on elsewhere. I’m not downhearted though – firstly because it had been sitting in the very tree I’ve always believed was its home, and on which I can now concentrate when I go looking for it; and secondly because it’s another addition to the list.