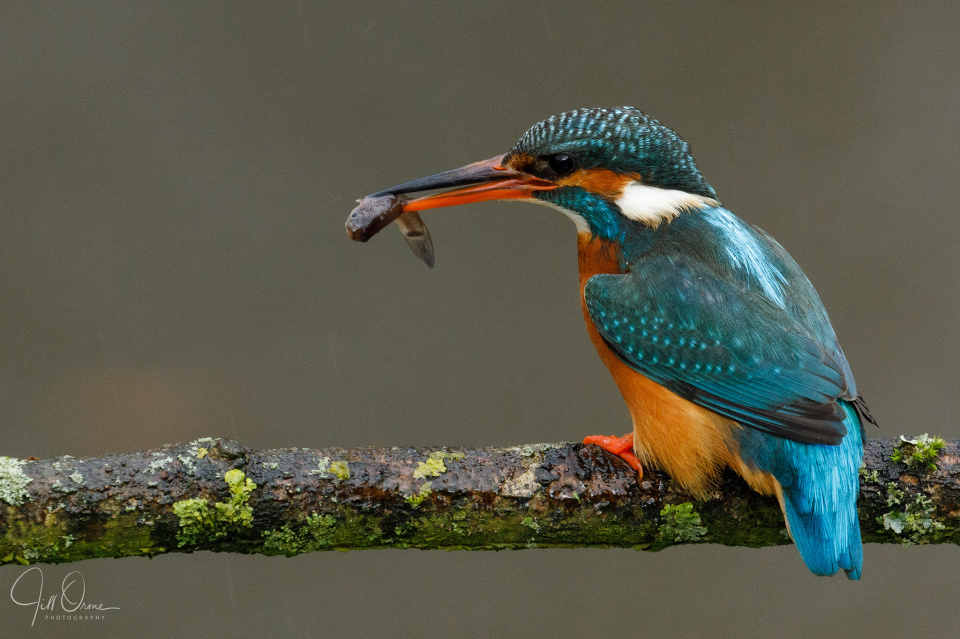 I’m just back home from a fascinating day photographing kingfishers on a private estate in Staffordshire. Across eight hours there were over twenty visits to the perches outside the hide by one or other of the main pair of birds within this territory, and I took 632 photos, but I’ve gone straight to this one, which is number 616, because it’s a shot I waited for all day.

I booked into the hide earlier in the week when I saw reports and photos from other clients that the kingfishers were engaging in courtship rituals, but the four of us in the hide today were disappointed on that front. Yesterday this female had the doubtless terrifying experience of being chased along the river by a sparrowhawk, and for most of today she was extremely nervous and skittish. Although the male called to her she wouldn’t come to the perch when he was there, and when she did come she was fishing fast and removing her catch immediately to a place down-river where we couldn’t see her, but where I assume that she felt safer eating it. The male fished and ate outside the hide very regularly, but he’s recently learned the trick of stunning his catch against the edge of the fishing platform rather than against a branch, which is a far less photogenic procedure!

Luckily we had lots of opportunities to take good shots of both birds perching above the water, and to watch the male clearing potential rivals out of his territory and trying to entice the female out to play. I was happy that I’d been so close to these charming little birds and felt that I’d learned a lot about their behaviour, but by 4pm, when it was pouring with rain and we were starting to pack away our gear and close up the hide, I hadn’t taken a single kingfisher-with-fish photo that I really liked.

At this point we heard both birds calling quite close to the hide, and then the female arrived, stayed, fished four or five times, and began asking the male to join her on the branch. We all pretty much held our breath in anticipation of some courtship, but though he zoomed past a couple of times, he didn’t seem confident that he’d get a friendly reception and he didn’t land. After a few minutes she left, and shortly afterwards we did too. As I was driving away the weather began to improve, and for the rest of the journey home I was kicking myself for not hanging on a little longer – but not having achieved all the images I’d wanted to capture gives me the perfect excuse for going back.

During some of our kingfisher-free time this afternoon I lifted a couple of other photos from my camera and put them up on Instagram, if you’d care to see them. And should you be interested in spending a day getting to know these birds, you can find out more about the hide here.