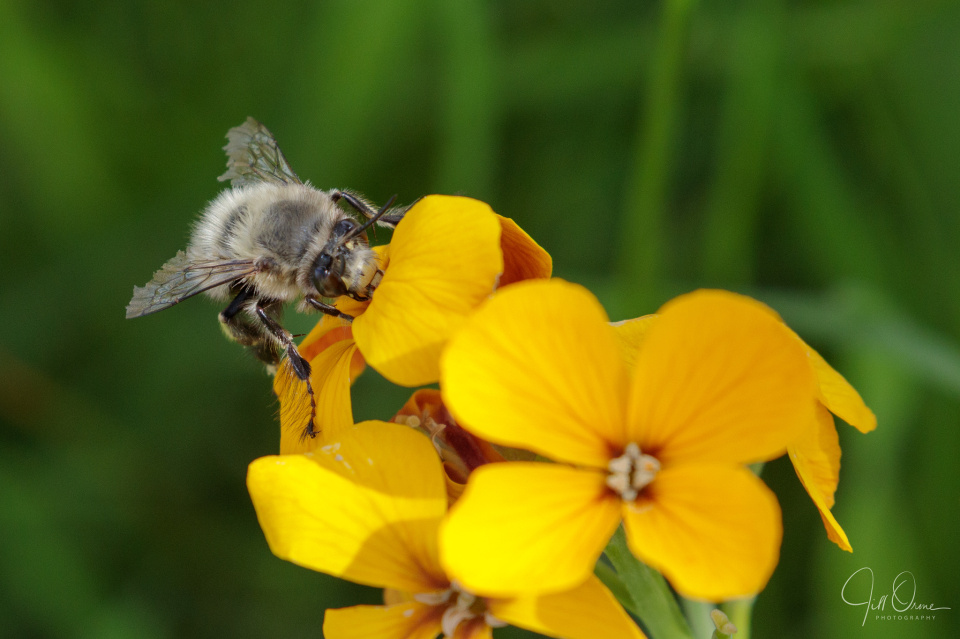 To be fair, I’m not looking all that good myself after a couple of hours of gardening (eeeurgh), but with his pile grey and worn, and his wings in tatters, this plumpie can’t be long for this world – which is reason enough for immortalising him today. All of the hairy-footed flower bees, male and female, seem to be living out their retirement now: I’ve only seen one female collecting pollen in the last several days, and both sexes mostly spend their time feeding from their favourite flowers, and bickering with each other. Just occasionally one of the males will have a slight rush of blood and pounce on a female, but I think it’s more for form’s sake than anything more serious, and after being shrugged off he calmly goes back to eating.

It’s nature of course – they’ve lived out their span, and fulfilled their function by creating the next generation. And they only know what they know. And me indulging in anthropomorphism and imbuing the situation with dramatic irony is sentimental and a bit childish. But I can’t help it: I like them, and they’re coming to the end of their lives, and that makes me sad.

Moving on to something entirely unsentimental, Lockdown Family Film Club this evening was Seven Psychopaths – a film I’m surprised I managed to miss when it came out, because I was a big fan of the director’s previous offering, In Bruges. Though 2012 was a relentlessly difficult year, so perhaps films were low down the family agenda – it’s honestly hard to remember. Anyway, I sat down to watch it tonight with some trepidation because I knew that it had pretty mixed reviews (for example, see Peter Bradshaw in The Guardian, followed three days later by Philip French in The Observer), but I thoroughly enjoyed it. Colin Farrell, Sam Rockwell, Woody Harrelson and Christopher Walken all had fun hamming it up, there was a solid cameo turn from Tom Waits, and the dog was adorable.