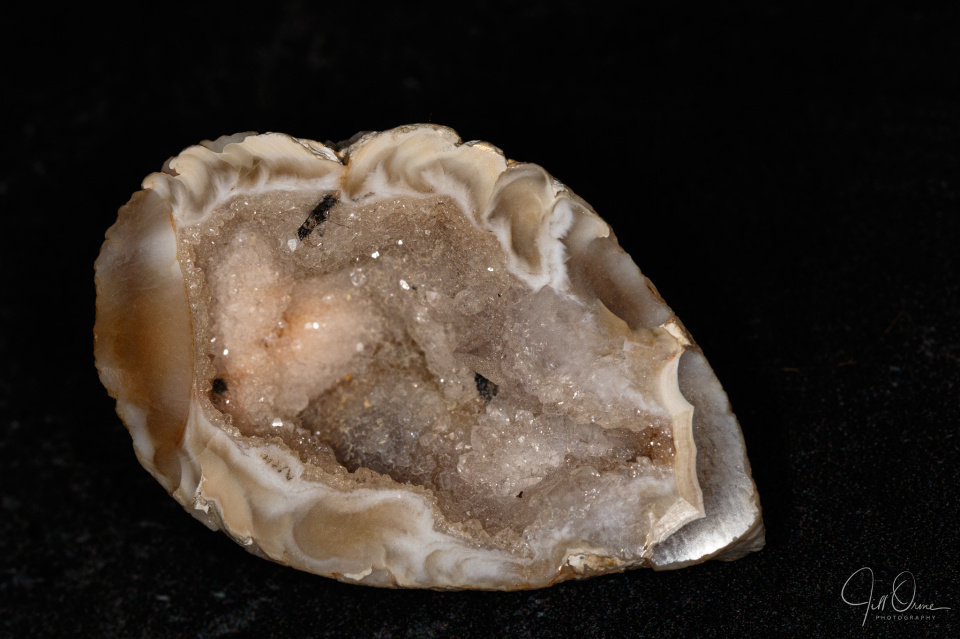 Despite us being on the right side of the Winter Solstice, it never actually got light today.

By tea time the lane was flooded, and R had to go and bring the wheelie bin he’d put out ready for tomorrow’s collection back up the drive, to make sure it didn’t tip over and float away. It’s not likely to be a problem: either the water will have receded by tomorrow, or there won’t be a collection anyway.

Anyway, because I was in a ratty mood I did quite a lot of cleaning and fettling, reorganised the ‘wine cellar’ (actually the stone base of the tower that holds up the centre of the house), and cleaned out another folder of photos from March (one of which I posted to Twitter, if that’s of any interest). I also tried to photograph some birds and squirrels in the garden, but even with the aperture as wide as it would go, and the shutter speed perilously low, the ISO was so high the images looked as though they’d been taken in a blizzard. So instead I had a go at this little geode – just an inch across – that I seem to have inherited from Child One. It took a bit of doing to get light bouncing off the crystals inside it without the cut and polished face blowing out, but we got there in the end. It’s not very sparkly, but it’s more festive than me.

Tomorrow is apparently going to be sunny, though very cold. If R and I can get out of here without a raft, a walk will be taken and normal photographic service may be resumed.

Oh – and for the record: there’s a rumour that a basic trade agreement may have been reached between our apology for a government and the EU. In which case R will be as smug as, because he’s been predicting a Christmas Eve announcement for the last few weeks. I don’t gamble, but I’m slightly regretful that I didn’t put a fiver on my own prediction, which is that if there is a deal it will be no more favourable than Theresa May’s Chequers deal, which Boris Johnson resigned over, referring to it as a “turd”. We shall see.