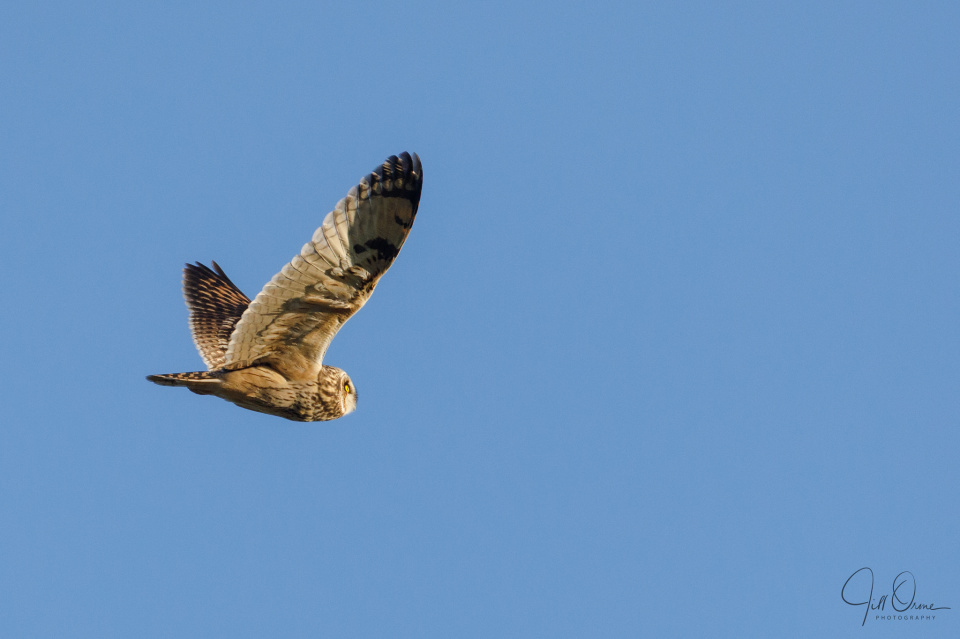 This is the pick of today’s owls, which gives you a pretty good idea of what the rest were like: I was fighting the light and losing for most of the afternoon. The run of good luck that Hillyblips and I have enjoyed at the owl field over several visits seems to have deserted us this weekend – though she already had an excellent stag in the camera from an early visit to Bushy Park, so she didn’t exactly need an owl today.

For all that I’m a little grumpy about it, I do think this image has some interest, in that it gives a sense of how soft an owl’s plumage is – the advantage of this being that it allows the bird to fly silently, increasing its chances of catching its prey. The disadvantage is that these feathers aren’t waterproof, and the owl can’t fly if they’re saturated, leaving it confined either to a tree or (more usually) in a burrow it excavates for itself within a tussock of grass, during periods of bad weather. A reliable source told me one day last year that he’d seen three owls sitting in a row on a hedge after a prolonged period of rain, holding out their wings to dry them; and on another day several people I know were able to photograph owls running around on the ground chasing rodents, because they couldn’t fly, and were too hungry (and presumably cold) to wait any longer for the weather to clear. 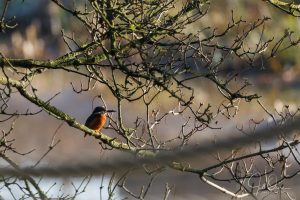 The extra today is a heavily-cropped shot of a male kingfisher. R and I went for an early morning walk at NT Croome, where it was misty and frosty, with rather lovely, heavily filtered light. We’d been hoping to see one of the otters of course, but were disappointed: much of the watercourse was still iced over, and the otters were presumably snuggled in the warmth of their holt, waiting for the ice to melt. We walked around the lake, and as we approached the rope bridge I explained to R that I always checked the small, scrubby trees just beyond it, because kingfishers were rumoured to use the branches as fishing perches – though I’d never ever seen one myself. “Oh, right,” said R. “What’s that?” – pointing to a small orange blob in the left hand tree. The kingfisher sat just long enough for me to rattle off a few frames, and then left – so If we hadn’t been there at that precise moment, with R living up to his reputation as an excellent wildlife spotter, we’d have missed him.

Sometimes the luck is with you, and sometimes it isn’t – and you just have to roll with it. Remembering, of course, that there’s always tomorrow!