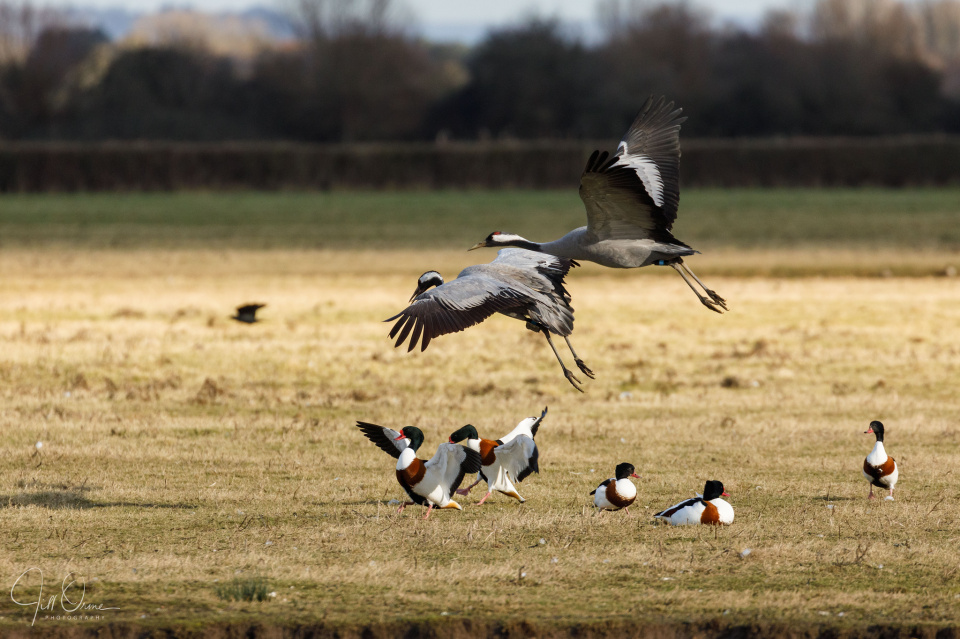 Shelducks are relatively big birds – somewhere between a mallard and a small goose in size – but you’d need to be elephantine to be unperturbed at the thought of a crane landing on you, and these drakes were thoroughly put out at finding themselves under the flight path. There were five cranes pootling about the north-east section of the reserve at Slimbridge today; a family of three birds had already flown across in front of the hide, and several large lenses remained focused on this pair until they also decided to relocate. I wasn’t especially happy with my flight shots, but I think the shelducks (sheldrakes?) give this one a little extra interest. 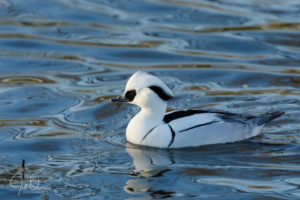 My extra image today is a smew in lovely late afternoon light, one of the (many) pleasures of Slimbridge being that on a nice winter afternoon the light on the display ponds is luscious. I’ve also posted a lapwing to my Facebook page; I’m determined to get a good photo of a lapwing one day, and though this isn’t it, it’s at least passable. I did manage some very close shots today, of a lapwing worming on the causeway the splits the South Lake – the down side being that the bird was on grass, and worming, whereas I wanted it on the water. One day…

And now to the bird list, which I’m afraid has had to be amended again: I was uneasy that I might have double-listed something else, so before I added today’s birds I sorted it by name, and discovered stock dove on it twice. Removing one line and renumbering took me back to 73.

While vexed at having to correct the thing twice, I’m frankly astonished at how many birds I’ve seen in the first four weeks of the year – and without even one owling session. When I decided to make a list I thought that I might just about get to fifty species across the whole year, which just goes to show that you see far more creatures than you think you do. Or that I think I do, at any rate. One day last week I was in a hide at Upton Warren, and some chap asked his friend how his list was going. “Awful,” was the reply. “I’m only on 84.” “I saw Tony the other day,” said the first bloke, “and he’s over the hundred already.” Muttering ensued, while I smiled to myself and made no comment. I was thinking of Emma Davies’ mantra The only photographer I will compare myself with is the one I used to be, and thinking that it’s a rule that could usefully be applied to birding – and indeed, I would say, to many other aspects of life as well.