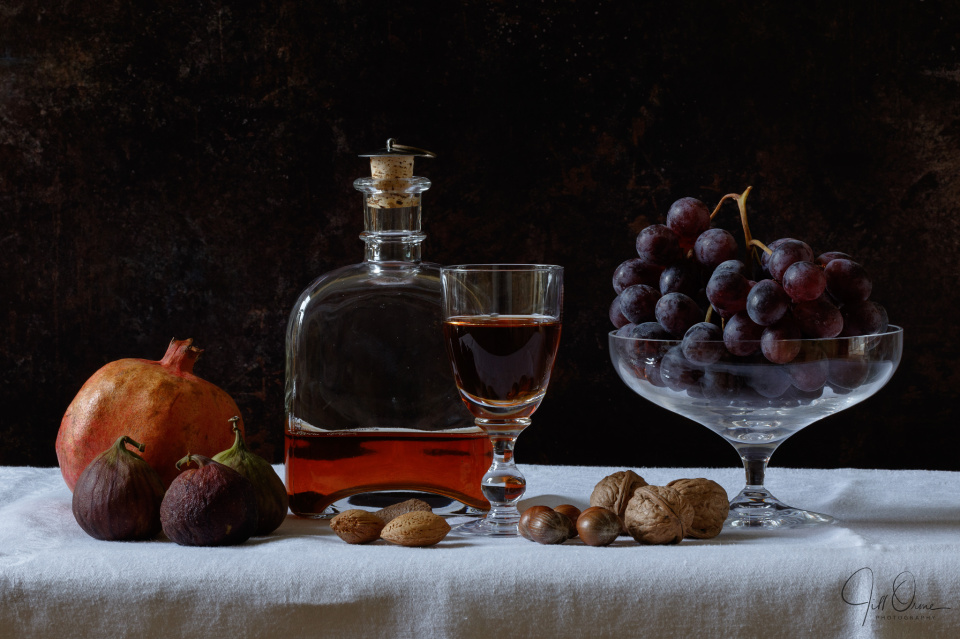 I set myself the task of creating a still life this morning, and then photographed it against different backdrops to see the effect of changing the background colour and brightness. R has chosen this as his favourite, because it reminds him of old Flemish paintings, but I think my own favourite is – probably – the lighter version I’ve added as an extra.

While I was indulging myself in photography play I took a phone call from the rheumatology department at Warwick, and ended up having quite a long conversation about the bloods they received yesterday. As I was having blood drawn to fulfil the GP’s request, I thought that I might as well get a set of routine tests done for the rheumatologists at the same time, and that turns out to have been a good move because it looks as though I’m fighting quite a significant infection. This would be an alternative explanation for the weird symptoms I’ve been experiencing, which I had feared might be due to an adverse drug reaction; in any case the result is the same, in that I’ve been pulled off my meds until my counts go back to normal, which gives me one less thing to worry about.

The rheumatology nurse suggested that it would probably be a good idea for me to take another Covid test, and no sooner was I off the phone than an email pinged in from the King’s College/ZOE study people, to whom I reported my symptoms yesterday, asking me to do exactly that. By this time it was about 2pm, but to my surprise I was able to book a walk-in test at Evesham for 2.30, and as R was heading out that way anyway he drove me to town, fetched us both a takeaway coffee, and then brought me back home – where I’ll now feel duty-bound to remain until I get the test results. Had I predicted the trajectory of the day when I got up this morning, I’d have found something to photograph in the garden, or grabbed a quick landscape in Evesham, and saved the fruit for photographing during my confinement.