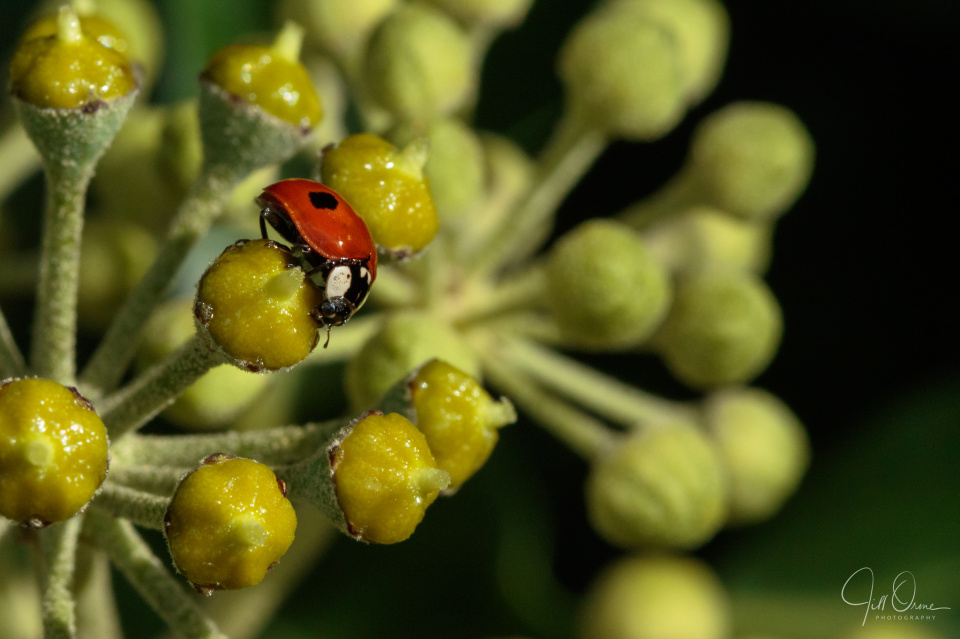 For much of the day we were barricaded in by builders, which didn’t seem to matter in the morning when the weather was gloomy and I had lots of desk work to be doing; but early in the afternoon the sun emerged (unexpectedly), and I began to be irritated at being stuck in the house. As soon as I reached what felt like a reasonable level of achievement I grabbed both cameras, climbed over the workmen, and struck out on a mini-beast safari.

This patch of flowering ivy is all of about a hundred metres up the lane, and it provided me with most of today’s photos. I was looking especially for ivy bees, and found several, along with some nice hoverflies and a few common wasps. But then my eye was caught by a tiny red accent in the middle of one of the flower umbels, which turned out to be a 2-spot ladybird. It trundled around in normal ladybird fashion for a while, but then it climbed up this flower stalk, and began – apparently – to browse the nectar. I’d only ever seen ladybirds eating other insects before – and in fact 2-spots are such voracious carnivores that you can buy their larvae to spread around your garden as pest controllers – but a little research has confirmed that they will also take nectar for a quick burst of energy, as well as eating pollen if other forms of protein are scarce. Of everything I photographed today, I think this little beetle is my most appropriate candidate for a Tiny Tuesday shot, being only about 5mm in length.

I’d just reached the furthest point in my wanderings and turned back towards home, when some fiercely dark cloud began blowing towards the village on a north wind, accompanied by rumbling thunder; and a few minutes after I made it safely back to shelter the storm arrived. I mention the direction of the wind because I think of a north wind in the autumn as a potential owl wind, but owls need a clear night to travel and I’m afraid they’re not likely to have one of those tonight. Nonetheless, I may swing round to the owl field quite soon – just to take a look, and see if any winter visitors have turned up there yet.