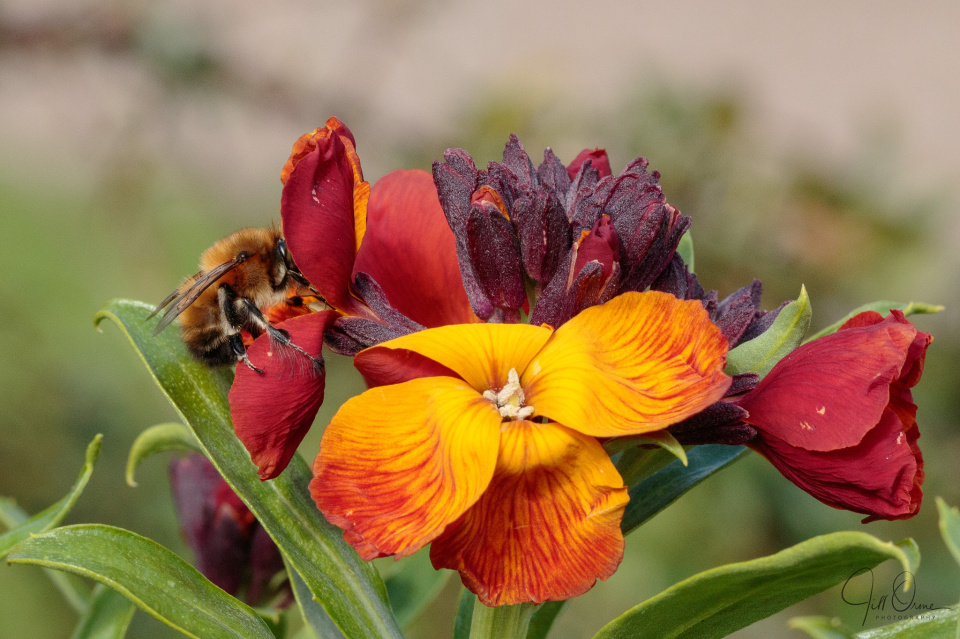 There were four competing hairy-footed flower bees in the front garden this morning, and at least as many in the wild garden. I’ve been keeping an eye on the wallflowers growing out of the front wall for a few days now, because plumpies love wallflower nectar almost as much as they do pulmonaria, and today when it looked as though the pulmonaria patch was temporarily running dry I stationed myself next to the wallflowers and waited. Sure enough, very soon a loud buzzing approached, and this bee began to feed…. from every single open flower in the cluster except the nicely lit one in the centre of the frame.

You have to laugh really – well, you should, though I confess that on this occasion I didn’t: it was blowing a hoolie and quite cold, and very shortly after this the cloud rolled in as well, and the combination of wind and poor light made macro photography nigh-on impossible. Now though, when I’m safely indoors in the warm, it does amuse me, which is why it’s my photo of the day. 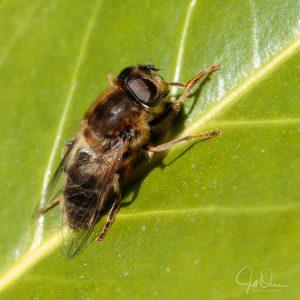 The extra is a female Eristalis pertinax hoverfly, basking on a sunny laurel leaf and grooming her front paws. I couldn’t tell what song she was singing, but the washing went on for far longer than the recommended twenty seconds – which is good of course, though the amount of lick she was using would probably be frowned upon by the Powers That Be. The Eristalis hoverflies are all honey bee mimics, and buzz almost as dementedly as hairy-footed flower bees, for which reason they’re often called drone flies. They’re entirely harmless, and the whole bee mimicry thing is just supposed to make potential predators think that they might be able to sting, and therefore leave them alone; but sadly, given the number of posts I see on social media along the lines of: “I just killed this before it could sting me, but it looks a bit funny – what kind of bee is it?”, their defence strategy isn’t entirely foolproof.