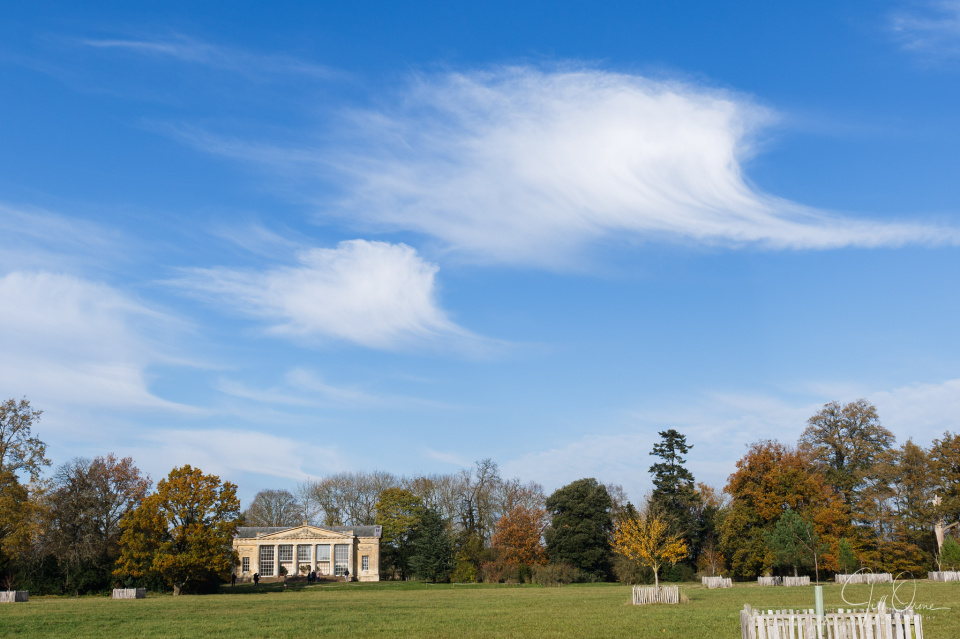 R and I went for a walk around Croome this morning, where they were theoretically fully booked – leastwise, it was indicated to us at the gate that we could only go into the car park if we already had tickets – but once we were out on the estate there were remarkably few other people around. I was, of course, a little sad to be making my first visit of the dragon-free months, but managed to find enough compensations to keep me engaged.

It had been misty early on, but by the time we arrived it was a gorgeous morning – warm and sunny, but with quite soft light and some fascinating cloud formations over the estate. Meteorology is one of a very long list of things I know almost nothing about, but I suspect these clouds were breaking away from the remains of a low cloud bank, as the basin in which Croome sits was warmed by the sun. R and I decided that they looked like the depictions of wind blown by cherubs on old maps (which I now know, having looked them up, are called wind cherubs, or wind faces), so we took to calling them cherub breath.

I’ve put some other photos over on my Facebook page, if you’d care to take a look. In the ones that include St Mary Magdalene, the church on the hill, you can see the cloud bank I mentioned, with the clouds appearing to be escaping from it. You might also notice that Facebook has played its usual games with the colour of my images, a subject about which it appears to think, incorrectly, that it knows more than I do. If you listen carefully you’ll probably be able to hear the grinding of my teeth.

I had a raft of things to do when we got back home, but wound up falling down the black hole of the ongoing US Presidential election count, and managing to achieve precisely none of them. By this evening I could feel my tension level rising, and had to force myself to close all election count browser windows and concentrate on other things. People with stronger nerves than mine seem increasingly convinced that Joe Biden will ultimately win, but I’m not going to fall into the trap of believing this yet. As John Cleese’s character Brian Stimpson says in the film Clockwise, “It’s not the despair, Laura. I can take the despair. It’s the hope I can’t stand.”