Today was better, weather-wise, than any forecaster I follow had predicted that it would be, and I celebrated by making two trips up into the Cotswolds. This morning the owls were having a lie-in, but I managed some reasonable shots of the shrike and a few other birds, and my best captures so far of a hare.

After lunch I headed back up, and arrived just as the shorties were beginning to hunt. There has been some anxiety at The Wall that some of the immigrants might already have set off back home, because only a couple have been seen over the past few days; but I think that must have been down to the weather because there were at least five birds flying this afternoon. And then, just as the light was beginning to fade and the temperature to drop, one of the local barn owls decided to join the fun, putting on a lovely display across the width of two fields for about ten minutes – before disappearing just as abruptly as it had arrived.

I’m posting the barn owl because I’ve never blipped one before, but I can’t resist giving you a shortie as well. I may be alone in this among the Cotswold owlers, because I’ve heard other people say that they prefer a barn owl if they can get a decent shot of one, but personally I love a short-eared owl, with its dramatic plumage and glowing amber eyes; this dark one has facial markings that seem to give it a ferociously intent expression. 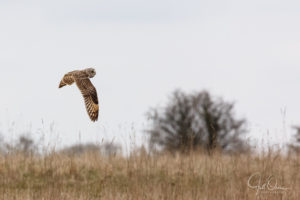 And finally, if you should happen to be interested in birds throwing up things that they can’t digest, I’ve posted to my Facebook page four shots of the shrike regurgitating a pellet – which to be honest is the most interesting thing I’ve ever seen this bird do. Nonetheless it continues to be a focus of great birder attention, as (according to the RSPB) it’s one of only 62 great grey shrikes overwintering in the UK. Like the short-eared owls, it could leave the Cotswolds and return to its native Scandinavia any time from now on when the wind and weather are favourable.