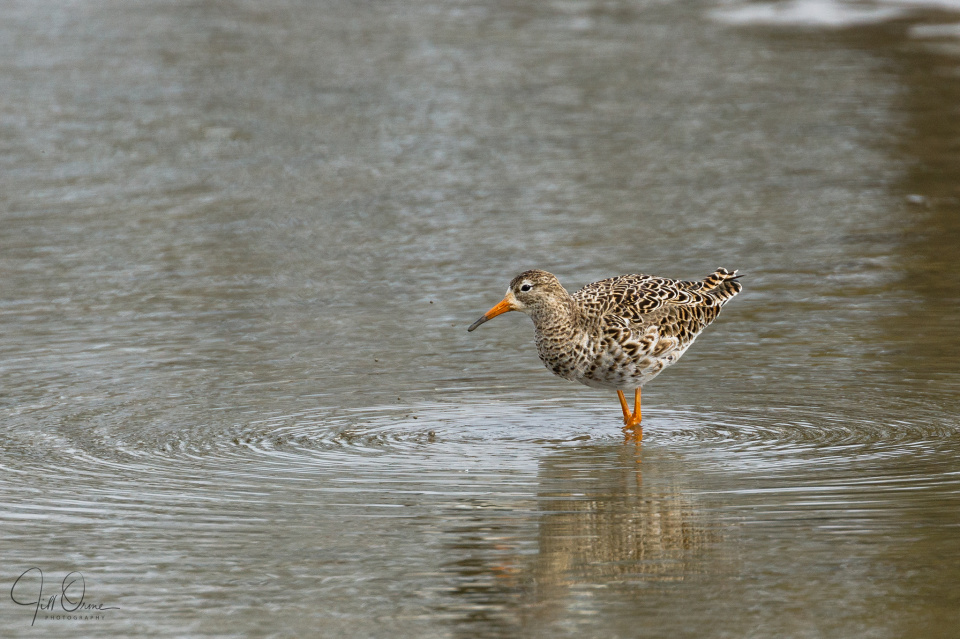 I’m indebted to R (who has the kind of low mind that an expensive education will help you cultivate) for the title of today’s blip. I’m also grateful to the bird identification group on Facebook for confirming to me that this is indeed a ruff, because it doesn’t look much like the ones in my books – though to be fair, one of those books does say something along the lines of “if you can’t decide what it is, it’s probably a ruff”. In other words, they’re highly variable – for example, most photos show much duller legs and a darker bill than this one has – but the thing that suggested that identification to me in the first place is the beautiful pale edging to the feathers of its back, which are often said to give it a scaly appearance, though I think that’s selling it rather short.

This is either a female or a juvenile bird. Breeding males look extraordinary at this time of year, with the extravagant neck feathers that give the species its common name; and as suggested by the Latin name they’re highly pugnacious, staging ritual displays called leks to compete for the attention of the females. A male in the early stages of developing this plumage was reported at Slimbridge a couple of weeks ago, but I haven’t heard of it since; this isn’t surprising though, because the UK is right on the edge of the ruff’s breeding range, and most if not all of the breeding birds will have moved eastwards into mainland Europe by now. 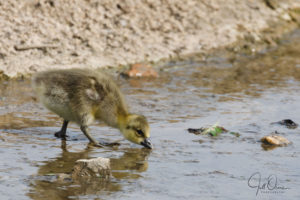 My extra today is a greylag gosling searching for food – I simply couldn’t resist its fluffy cuteness. I happened across two greylag families today, and it was noticeable that in both the parents were working together to protect their young: one adult tends to watch the chicks and the area around them, while the other scans more widely, including watching the sky for danger.

And finally, I’ve put a photo of a male hooded merganser on my Facebook page, if you’re interested – as a belated companion photo to the one in this blip.