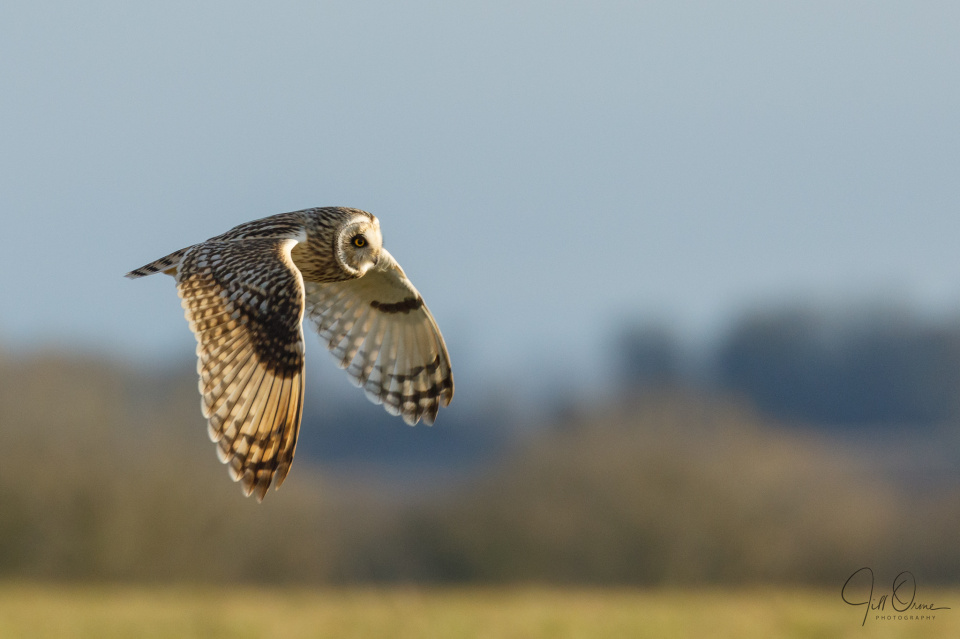 After (virtuously, if rather belatedly) doing my tax return this morning, I zoomed off to the Cotswolds, arriving at the owl field at 1.20pm to find Hillyblips already set up and ready to shoot. We then stood… and stood… and stood… for over an hour and a half before the first owl made its appearance.

It was freezing up there.

By the time we got the first fly-by I was shaking with cold and could barely feel my fingers – even though I’d been wearing gloves and had been standing with my hands in my pockets during the wait. I’m choosing to blame this rather than incompetence for the fact that I could barely use the camera today, and achieved a far worse ‘keeper’ rate than yesterday, even though the light was much better.

Having said which, I do have some images that I’m pleased with, and R has chosen this one because he loves the light coming through the nearer wing. My own favourite (probably) is the extra, taken nearly an hour later when the sun had virtually disappeared, the autofocus was rarely locking on, my eyes had all but given up the unequal struggle, and I was sternly telling myself to stop being foolish, pack up, and go home. Just at that moment I got one final fly-by that yielded half a dozen nicely focused, dusky images – so in the end I was pleased that I hadn’t taken my own advice. The penultimate shot in this final run has gone onto Facebook, if you’re interested; I think the owl turned and looked at me because it could hear my teeth chattering. 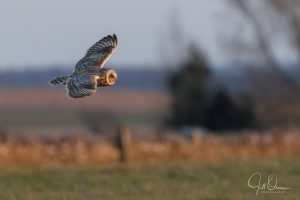 As we were packing our gear back into our cars, HB pointed out the full moon rising on the other side of the road, looking almost unbelievably huge and pink. The very last thing my arms wanted to do at this juncture was lift the camera again, but I couldn’t resist a few shots, one of which I’ve also posted to my Facebook page. Because we live east of the owl field I then had the ongoing pleasure of watching it mount in the sky for most of my journey home – though I managed to talk myself out of stopping to take more photos. The January full moon is termed the wolf moon, for reasons I can’t be bothered to investigate; personally I think it should be called the owl moon.