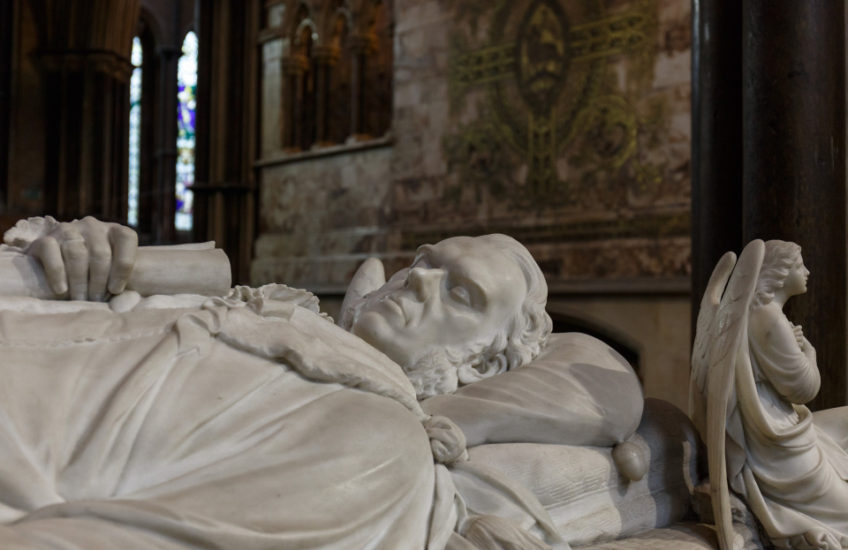 R and I had been planning a major road trip today, but the weather was so depressingly murky and grey that we decided to postpone our odyssey and just go to Worcester instead.

I hadn’t been in Worcester Cathedral for many years, and I’m afraid that it suffers quite badly by comparison with Gloucester: it’s rather dark and dour, with quite a lot of clutter lying about the place, and it lacks the soaring majesty of its neighbour down the road. It’s also filled with plastic chairs, which might work from a practical point of view (though I can’t help but feel that someone must have to spend a lot of time straightening them all into a semblance of neatness), but which look horrible; and today there was a lot of staging in the nave, set up in preparation for some kind of musical event. However, there are a good many points of interest, from mediaeval tombs through to some quite astonishingly tasteless high Victoriana – the Cathedral had fallen into a state of severe disrepair by the C19th, and was extensively done up in the middle of that century by Sir George Gilbert Scott. It’s also true that the light today was so appalling that it would be difficult for any church to seem less than depressing, so to be fair I should take a return trip and have another look at it on a brighter day.

Worcester’s major claim to fame is that King John, who was very interested in the Norman bishop St Wulfstan of Worcester, specified in his will that he was to be buried in Wulfstan’s church, and after he died at Newark in Nottinghamshire in 1216 his body was brought to the Cathedral; his tomb lies close to St Wulfstan’s shrine. John, if you remember your 1066 And All That, was an Awful King. He first attempted to take the crown while his brother Richard the Lionheart was away on a Crusade, and then after Richard’s death he succeeded to the throne by dint of having his nephew Arthur (whom Richard had named as his successor) murdered. He entered into a feud with the Pope which led to his excommunication; and waged war unsuccessfully against both the French and his own Barons. His infamy was such that over the centuries he has come to seem almost like a pantomime villain, and though I’m going to stick my neck out and say that I don’t believe that he either lost the Crown Jewels in the Wash or died of a surfeit of peaches, I haven’t read any revisionist views of his reign that manage to paint him successfully as anything other than a Bad Man.

So I’m not featuring John today. Instead I present to you a rather splendid Victorian monument, to someone whose name I’m afraid I failed to note. I like it partly because of the quality of the carving, but mainly because the tiny guardian angel looks to me from this angle to be in a massive snit. I’ve put some other images – including John’s tomb – here.

After doing the Cathedral, R and I took ourselves off to the cinema, to catch up with Fantastic Beasts and Where to Find Them. Having originally said that I couldn’t see any reason why I might possibly enjoy this film, I have to confess that I loved it – I even cried at the sad bit, which was most embarrassing. I tweeted J.K. Rowling afterwards to tell her how much I liked it; and though I don’t generally keep Twitter notifications, I think I may just hang on to the one that arrived ten minutes later, which said, “J. K. Rowling liked one of your tweets.”