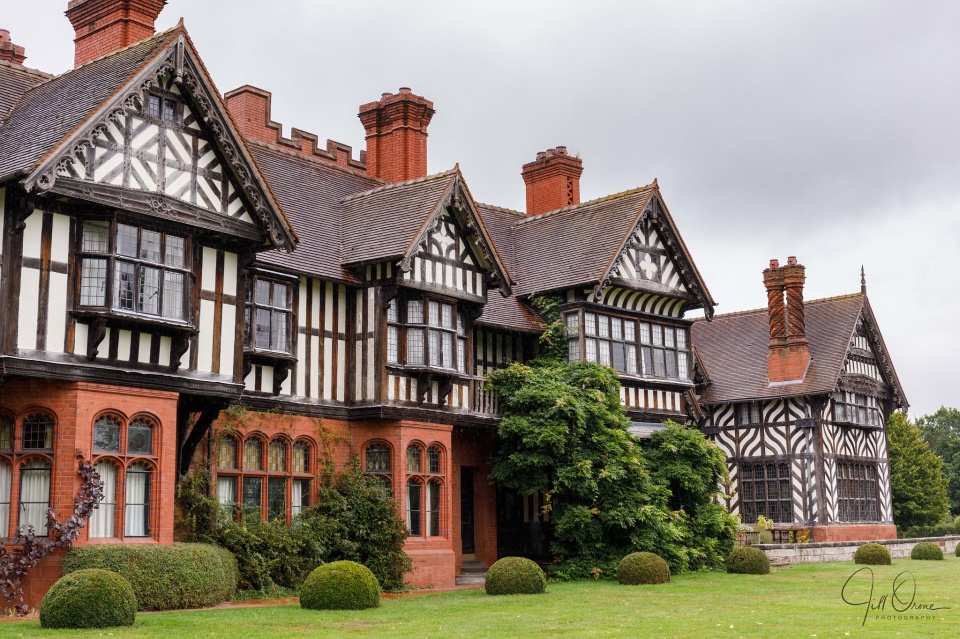 By this morning the good weather we’ve enjoyed for most of our trip had been replaced by teeming rain, so we weren’t as sad to leave Liverpool as we might otherwise have been. We broke our journey home at Wightwick Manor near Wolverhampton, a National Trust house that’s been on my list of places to see for a couple of years, but which is just a little too far from home to be a ‘pop out to’ place. It’s pronounced ‘Wittick’, by the way, because… English is like that.

The house was built in 1887 for the wealthy Wolverhampton paint manufacturer Theodore Mander, and given to the National Trust just fifty years later by his son, the radical Liberal MP Geoffrey Mander. The Trust originally didn’t want the house, but changed its decision on realising that this was probably one of the best examples in the country of Victorian baronial style. Geoffrey Mander and his second wife continued to live in Wightwick as curators; Rosalie Grylls Mander was an academic with a special interest in the Pre-Raphaelite movement, and the couple added a large quantity of Pre-Raphaelite art to the house, which was already decorated in Arts and Crafts style. The Manders’ foresight and philanthropy has led to us being able to walk through a series of perfectly preserved Morris interiors, and there are enough quirky personal touches to let us imagine people actually living in these rooms.

At the moment there is a special exhibition in one of the bedrooms of the work of Lizzie Siddall, best known as the unfortunate model in Millais’ Ophelia (the story is here, if you don’t know it), and the unfortunate wife of Dante Gabriel Rossetti, and who died at just 32 from an overdose of laudanum. I had known that she had aspirations to be an artist herself, but I’d never seen any of her work before – but thanks again to the Manders, who bought a large parcel of it when it came up for auction in (I think) the 1920’s, I now know that although she had no training she did have talent; the display left me with an even deeper sense than I’d had before of a life that was tragically unfulfilled.

Another very good reason for visiting Wightwick is that one of the outbuildings has now been turned into a gallery, and has a semi-permanent collection (I believe that it’s due to be be refreshed every couple of years) of the works of Evelyn and William de Morgan. I could rave about some of Evelyn de Morgan’s paintings for hours, and also bore on for quite a while about the fact that a few years ago I had the chance to buy a William de Morgan display plate for a couple of hundred pounds but decided not to, and the way I feel about that EVERY TIME I’M REMINDED ABOUT IT…. but I won’t. Just go to the Wightwick, and don’t forget to check out the Malthouse Gallery – if Arts and Crafts and the Pre-Raphaelites are your thing, I promise you won’t regret it.