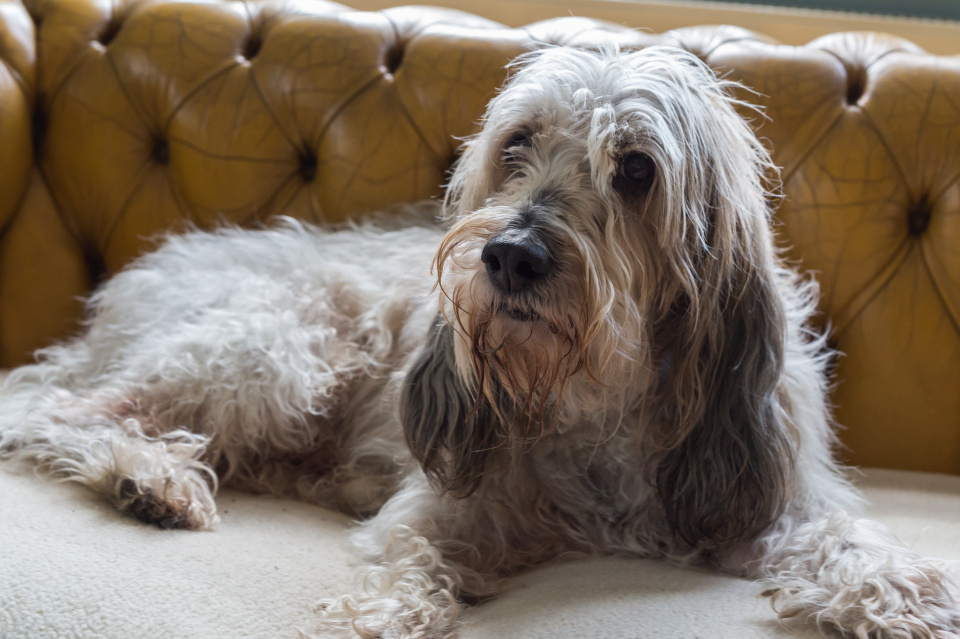 I don’t know how he does it. Twenty four hours after being groomed, his coat is full of seeds and there’s something suspiciously unpleasant-looking in his beard. And he’s barely left that sofa…

Several people asked me yesterday about the red cabbage I was cooking; I use Nigella Lawson’s Viennese red cabbage recipe, which if you don’t have her book How to Eat can be found on the web here. I do recommend that book, by the way – several of my favourite recipes come either from it or from Feast.

And I promise you that decent red cabbage can be frozen and defrosted without turning to goo – I’ve been doing it for years, and a friend told me this morning that having discovered that her husband can’t tell the difference between home-made and shop-bought, she currently has a freezer full of the M&S stuff. On Christmas eve I’ll move mine from freezer to fridge to thaw out, and on Christmas day I’ll microwave it for a couple of minutes and then leave it in a serving dish in the warming oven till I’m ready for it.

I was also asked about the damson gin, which is made in the same way as sloe gin: essentially it’s a 1:2:4 mixture of sugar, fruit and gin, and if you remember those proportions you can make up any quantity that suits you. This year I only managed to forage 500g of damsons from the hedgerows in the village, so having slit the skins I put them in a large jar with 250g of caster sugar and one litre of gin; then sealed the jar, shook it well and left it for three months in a cool, dark place. I shook the jar once a week for the first month, by which time all the sugar had dissolved; after that I gave it a shake whenever I happened to remember. By contrast we had a very good sloe year here and I have three litres of sloe gin steeping, which I’ll also decant before Christmas.

After yesterday’s rushing about I had a pretty quiet day today: I finished filtering and bottling the damson gin, and wrapped some Christmas presents. I also avoided standing on anything higher than a kerb! This morning was cloudy, but by the afternoon the sky had cleared and there seemed to be a promise of a sunset; I went out with the camera in hope, but in the event another cloud bank came in just in time to spoil it. I did get a few quite nice images, but nothing spectacular – and as it’s a while since you’ve seen Arthur I thought I’d blip him today.