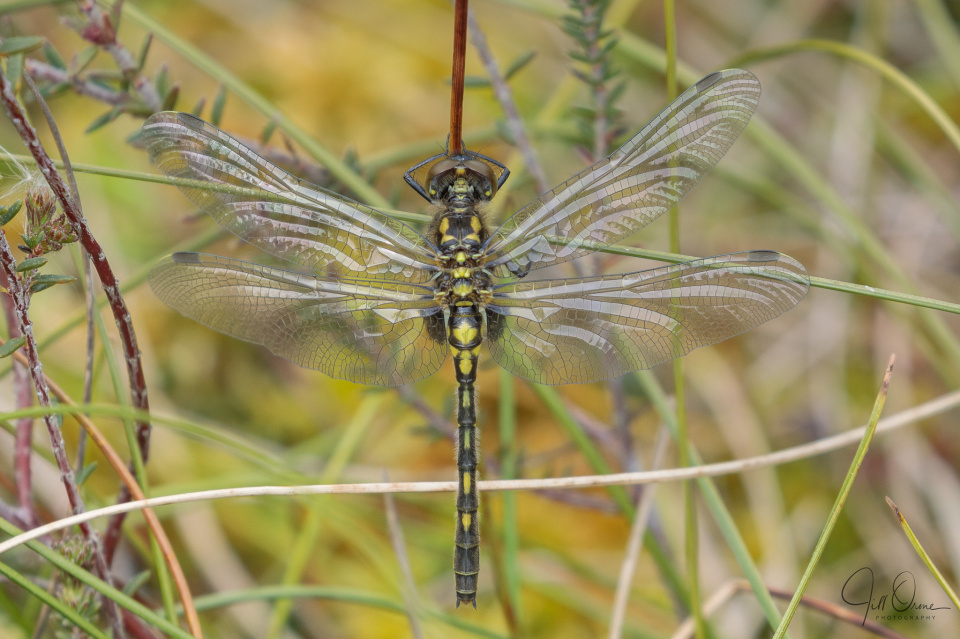 I had a really fascinating morning today, visiting Chartley Moss in Staffordshire. Chartley Moss is a floating peat bog, or Schwingmoor, which is a rare enough thing in itself – but it’s one of only three known in the entire world to have been formed when salt in the rock underlying a developing peat bog was dissolved away by ground water, causing the eventual collapse of the rock, and leaving the peat floating like a raft on the surface of a lake. At Chartley the peat raft is around three metres deep, and the water beneath it is about twelve metres deep; as you’d perhaps expect, the peat isn’t fully stable even at that depth, and given this, and the extreme rarity and scientific importance of the site, you’re only allowed to go there on a supervised visit. The land is privately owned, but it’s managed by Natural England, and once a year they and the British Dragonfly Society run a couple of guided walks, to allow Odonataholics to go and visit the extremely rare White-faced Darters that inhabit some of the pools.

One of the most notable things about peat bogs is that they’re acidic. Although the site supports a wide range of vegetation, it all has to be able to cope with low pH – so there are things like cranberry, bilberry, bog rosemary, and heather growing on the surface of the peat, as well as exciting things like sundew, and lots of sphagnum moss. During the last couple of centuries attempts were made to drain the bog by digging drainage ditches and planting conifers, but many of the trees have now sunk under their own weight and drowned, and Natural England is gradually removing the surviving ones, as well as blocking the drainage ditches, and discouraging nutrient-rich run-off from surrounding farm land; because of this work the water table is rising again, and the ecology of the bog is improving.

As well as snakes and lizards, Chartley Moss supports a lot of insect life, including butterflies, beetles and dragonflies. There’s a population of Brimstones, which lay their eggs on the leaves of alder buckthorn, while smaller butterflies graze on the low vegetation – I managed some distant record shots today of a Green Hairstreak feeding on cranberry, and it’s said that this is also a good site for Small Pearl-bordered Fritillaries. There are believed to be twenty two species of Odonata found at the site, but the most notable is the White-faced Darter, which is specialised to live on peat bogs and is found at only a handful of sites in the UK.

As I’ve been grumbling for the past few weeks, the dragon season seems to have got off to a late and slow start this year, and it’s only in the past few days that WFDs have been reported to be emerging at Chartley Moss. Today our group found several teneral individuals, including the one in my main photo; they start out humbug brown and yellow, and then as they harden become black and yellow like this specimen. Females remain black and yellow, but I think this is a male, and as he matures his yellow will change to red; both sexes develop the characteristic white frons as they mature. This morning was fairly overcast, but every time the sun did emerge a few mature males would appear as if by magic, and patrol the edges of the pond in search of potential mates. They were very fast and reactive, and I totally failed to get any flight shots, but I did manage to snap one chap during a very brief rest stop, and I’ve added a heavily cropped shot in the extras – it won’t win any awards, but it does show the development of his adult colouring. 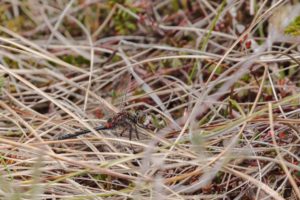 The fact that it provided my first ever encounter with some White-faced Darters would be enough in itself to make this a memorable day; but Chartley Moss is an extraordinary and special place, and I’m very happy to have paid it a visit.