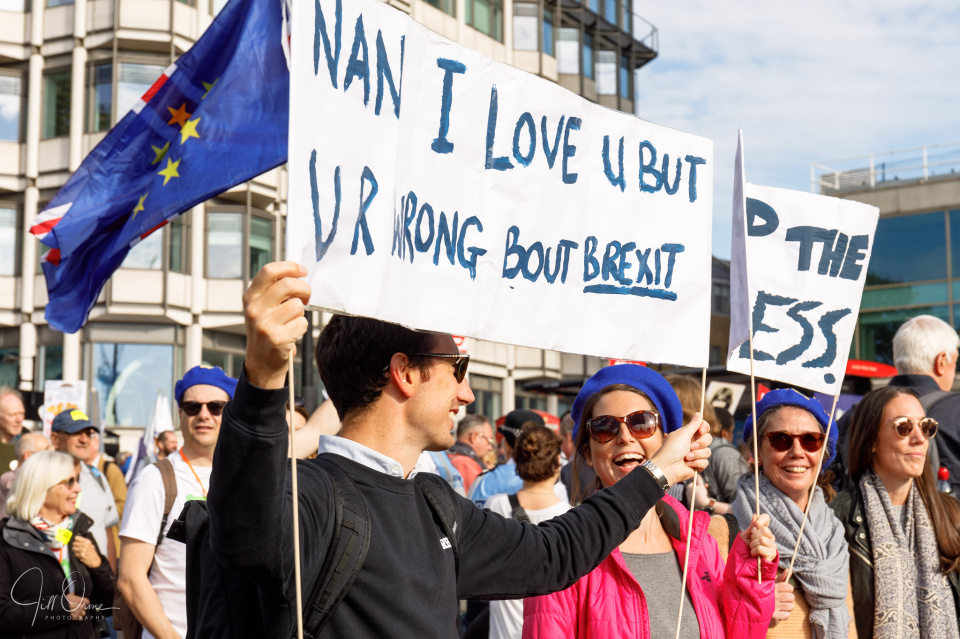 I haven’t been on a demo for about 35 years, and R had never been on one before, but even though we’re not optimistic about the outcome we were determined to stand up and be counted today. And we were, along with over half a million other people, who also want this country to be given the chance to change course, before it ruins itself, and deprives our children and grandchildren of the advantages we have enjoyed.

The march went from Park Lane, theoretically beginning at noon, to Parliament Square, where there were speeches from various notable folk beginning at 2pm. However, even though we’d entered the crowd outside the Hilton Hotel, which is well down Park Lane, the wave of movement only reached us just before 2pm, and by the time we reached Parliament the speechifying was over. I’ve since read on line that the tail end of the march had barely reached Hyde Park Corner by the end of the event – such was the mass of people.

As someone who hates crowds even more than I hate both standing around for long periods of time and walking extremely slowly, I’m surprised by how uplifting I found this demonstration: people of all ages and states of health, from right across the political spectrum, and from all corners of the UK (and some from beyond), patiently and good-humouredly making their feelings known through what felt like quite a long afternoon in today’s hot sunshine. I’ve chosen this photo because I think it captures that spirit.

I’d also like to say that the police, who I believe were expecting around 100,000 people, were brilliant – and I’d like to think that they thought we were OK too.

“We few, we happy few, we band of brothers;
For he to-day that sheds his blood with me
Shall be my brother; be he ne’er so vile,
This day shall gentle his condition;
And gentlemen in England now a-bed
Shall think themselves accurs’d they were not here,
And hold their manhoods cheap whiles any speaks
That fought with us upon Saint Crispin’s day.”
Shakespeare: Henry V (Act IV, Scene iii)