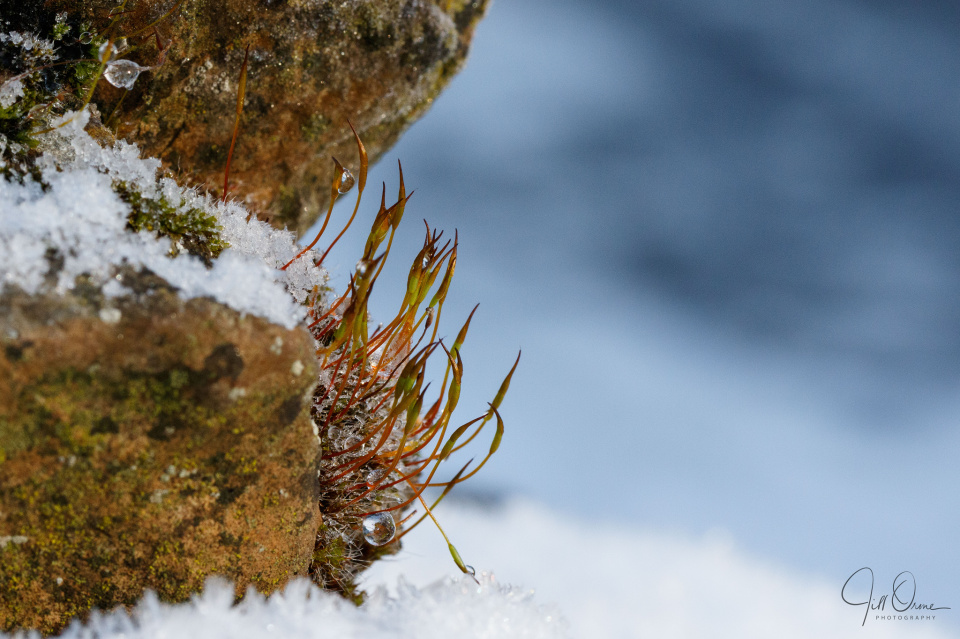 This morning dawned bright and sunny, but cold and frosty, with a little of yesterday’s snow still present and glistening enticingly. R and I had tickets for an early walk at Charlecote, but having been caught out on New Year’s Day we checked the National Trust app before getting the car out, and discovered that the estate was closed because of heavy snow and ice. The light was so nice that I’d have been tempted to walk the parish in search of landscape images at this juncture, had R not watched a dog walker replicate the end of Torville and Dean’s Bolero routine on the road outside the house, and then struggle to get to his feet on the icy surface. Suddenly a little garden safari seemed a better option.

You’ve probably noticed by now that the moss that grows on our old garden walls is one of my go-to subjects for winter macro images. I’d never really bothered to ask myself the identity of this plant until a couple of days ago, but then I used the Seek app on it, and was informed that it’s Tortula muralis, or wall screw-moss – an extremely common species, that’s found throughout the world. I’ve chosen this shot today simply because it’s a bit different to my usual shtick, but there are four more images from this morning’s wall/plant/snow photo-shoot over on Facebook, if you’d like something a little more head-on.

Later R went down to the wild garden to begin the process of cutting up the mountain of prunings we generated from the dogwood bushes on Saturday. My joints are flaring at the moment so I wasn’t able to help, but with the sun out and the garden full of birds I couldn’t resist being out there with the camera, so at least I was keeping him company. Or at least, acting as a counter-irritant. I was delighted to spot a pair of goldcrests in one of the big conifer trees, but they weren’t as pleased to see me, and retreated under cover before I could photograph them, from where they twittered at me furiously until I moved out of their vicinity. My previous experience of goldcrests had led me to believe that they’re not especially shy of humans, but it seems that this isn’t always the case.