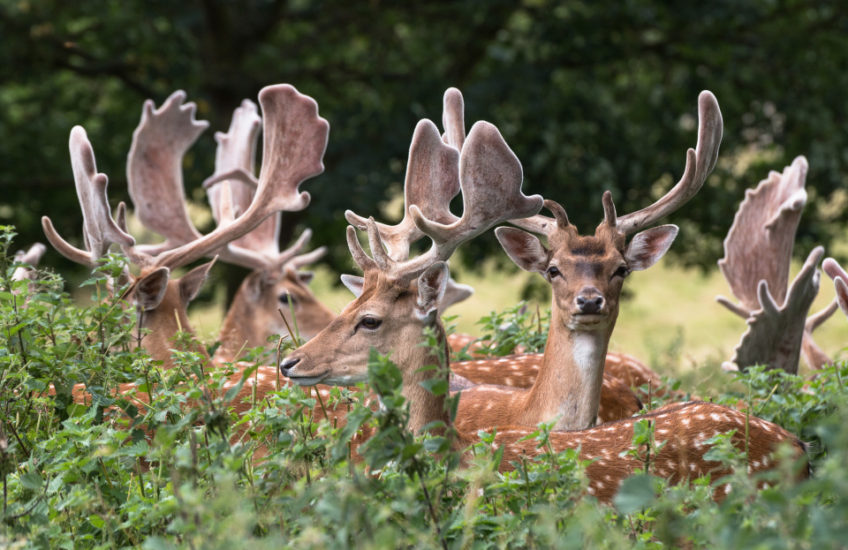 “Do you think she’s seen us?”
“With all these nettles? Nah – you’re fine. Just keep your head down and she’ll never spot us.”

1. I got an email to say that the 5D is about to be sent back home from Glasgow, after its four-week stay in the camera hospital.

2. R was finally able to collect his car, a month after taking it to the garage for what should have been a routine service. Better yet, all the extra work that was needed – which involved pretty much a total rebuild – was done at no cost to us. We’ve had to fund a hire car for a month, but given that the cost of parts and labour on the Mazda must run into thousands of pounds, we’ve decided not to quibble about that.

3. I went to Charlecote to have lunch with my friend P, and though it was a very strange day, weather-wise, and there were hardly any bugs in evidence, I did bump into the Fallow Deer Boys, who were in good form. I also managed to track down the Fallow Girls eventually – they were hanging out very peaceably with a flock of Jacob Sheep, and didn’t appear to be missing the Boys even slightly.

1. I was IN THE WRONG PLACE. P and I had actually agreed to meet at Coughton Court, but I’d somehow managed to read Coughton as Charlecote. And thus, my carefully-constructed impersonation of a functional grown-up collapsed in ruins – it’s just lucky that P doesn’t have to work with me any longer, and therefore won’t feel the need to assign another team member to lead me around and make sure I don’t get myself shut in a cupboard or something.

2. The camera repairers have suggested that I should test the lens I had on the 5D when it broke on a different body, in case it was that that caused the main FPC (whatever that is) to fail. This was the Big Lens – which I did in fact immediately swap onto the 70D at the time, where it appeared to be working normally… but now, of course, I daren’t use it at all. Just in case. So it will have to go in to Canon for checking. *Grinds teeth.*

Bad things that happened yesterday, which I was too grumpy to talk about at the time: the PC broke.

So tomorrow R and I are going to be driving around, Sorting Things Out. The PC will need to be dropped into the computer shop in Stratford so they can take a look at it; R wants to do a preliminary recce among the various car garages in Stratford with a view to getting rid of the Mazda and buying something else; and the Big Lens is going on its holidays, via London Camera Exchange in Leamington.

If we’re lucky we may even arrive home to find the roofers repairing the garage roof, which has been leaking like a thing that’s much more leaky than a colander (or even a sieve) for about four months now. They swanned up to the house at the beginning of last week, asking to be allowed to re-measure it because it was so long since they’d originally quoted that they couldn’t now remember what they needed, and promised to be back to start the work three days ago. Or today at the very latest. Sigh….