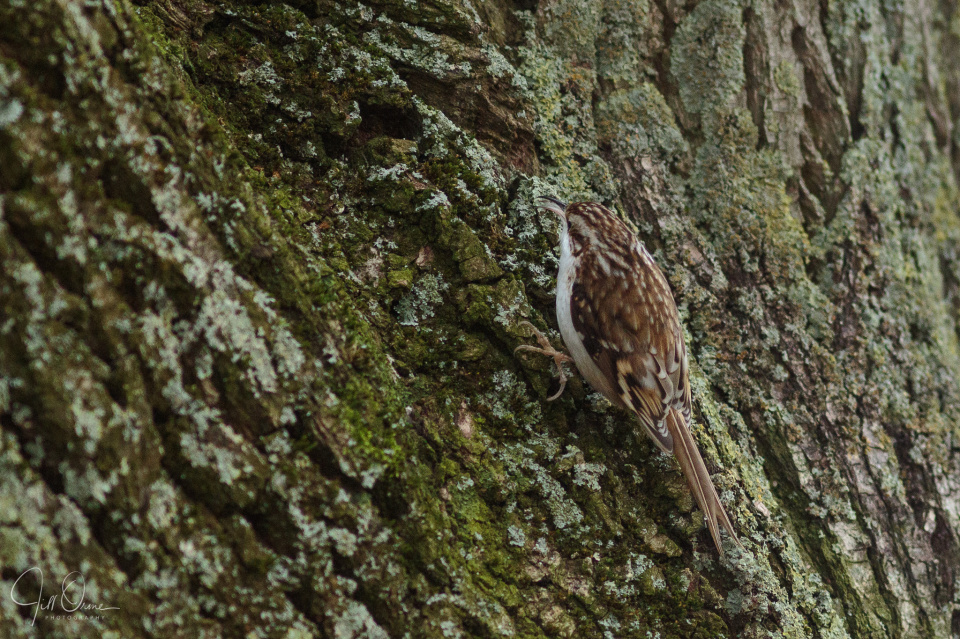 Goodness knows why this little bird is called a treecreeper. Treedarter or treezoomer would be far more appropriate, because they’re as fast as a really fast thing, and hardly ever still for longer than a fraction of a second. Being tiny they need to eat almost constantly, so they spend their waking hours hunting for the tiny invertebrates which are their principal food. A treecreeper will select a tree and then, starting from quite low down the trunk, will circle round and round it and then out along one or more of the main branches, searching crevices in the bark with its curved bill for insects and larvae. When it has worked the tree to its satisfaction it will move to another one and start the process again.

I spotted one of these lovely birds in the park on the south side of the Avon in Stratford a couple of years ago, and ever since then I’ve looked out for them every time I’ve walked through – but to no avail. This morning I happened across those old photos (which were better than this, if I’m honest, because I was closer and the light was much better), and I showed them to R and told him the story. An hour later, as we set off through the park on our way to lunch, I reminded him that we needed to look for them, and he smiled indulgently and said, “OK.” And then, thirty seconds later, I said “There!” “What? Where?” “There!!” – leaping into action with the camera.

As I already suggested, this isn’t my finest work: the light was Stygian, I’d brought the small camera with the 300mm lens rather than lugging the big gear, and by the time I got reasonably close to the tree, the treezoomer had realised that it was being stalked and was heading upwards at speed. But I’m still delighted to be blipping it today, because it’s such a charming little creature.

If you have access to the BBC iPlayer, I recommend that you watch the segment from the most recent Winterwatch series on the way treecreepers roost in the Caledonian Forest. These are solitary birds which roost alone, and being unable to drill out sleeping crevices in the tough bark of the local Scots pines, they’ve learned to roost in the much softer bark of the giant sequoias that were introduced to the forest by the Victorians. The shelter provided by the trees, and the warmth they generate, helps the Scottish treecreepers to survive the winter. Inexplicably the BBC hasn’t released this as a standalone clip, but the episode is here, and the treecreeper segment starts at 37m 50s. I just watched it again, and enjoyed it as much as when I first saw it.