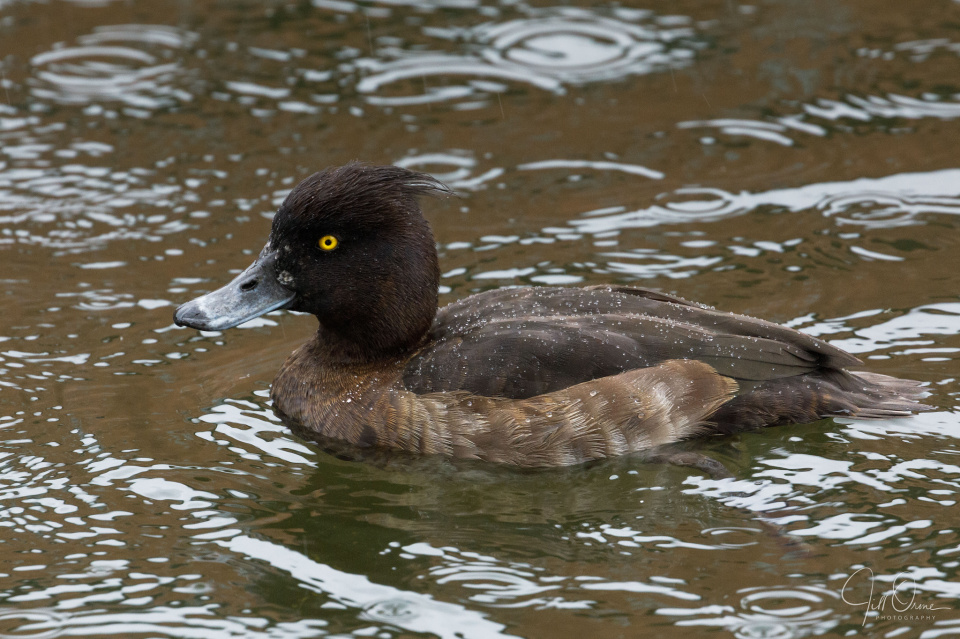 I had to go to Stratford this morning for a dental hygiene appointment, and afterwards I walked along the south side of the river as far as Weir Brake Lock, and then back again into town. As I approached the theatre I started to scan the river for tufted ducks, though without any real expectation of seeing one so early in the autumn – so I was surprised and pleased to spot this one, preening itself busily in the middle of the river. Better yet, it took a break from its toilette and came over to the bank to hunt for molluscs, allowing me some decent views.

The eclipse plumage of a male tufted duck is very similar to the year-round plumage of a female, and juveniles have similar colouring too, which makes distinguishing between them quite tricky at this time of year. You can’t rely on their crests either, because these are less obvious on the males while they’re in eclipse, and are always variable on the females. The reason I think this is a male is that every now and then what little light there was this morning would catch one of his cheeks, and produce a trace of the purple/green iridescence that’s one of the hallmarks of a male tuftie in his breeding finery. You may be able to make it out in the photo I’ve posted to Facebook, if you’d care to take a look.

If this little chap hangs around I may get the chance to keep an eye on him and test my theory, as his plumage either changes or doesn’t – but he’s not likely to stay unless he’s joined by some other tufted ducks quite soon, because they’re gregarious little birds and like to hang out in a group. In good winters a small flock builds up in Stratford and stays until the early spring, but last year there were rarely more than half a dozen on this stretch of the Avon at any one time, and they came and went quite frequently. There’s no way of being sure where they come from or go to, but it’s likely that they’re winter tourists from northern Europe or Iceland, which swell the resident population of around 20,000 breeding pairs in the UK and Ireland to over 150,000 individuals.

Stratford could certainly do with a few tourists, because it’s almost painfully quiet, but with the theatre, the Birthplace Trust properties, the Guildhall and the Guild Chapel all closed, and shops standing empty on the High Street and Bridge Street, it’s hard to see what would entice the human variety into the town right now. I could be enticed though, if there are tufties to photograph and some decent light to capture them by; in fact, if the rumour conveyed by Hillyblips that there’s a vole crisis at the owl field turns out to be correct, I may need all the ducks I can get to see me through the winter.