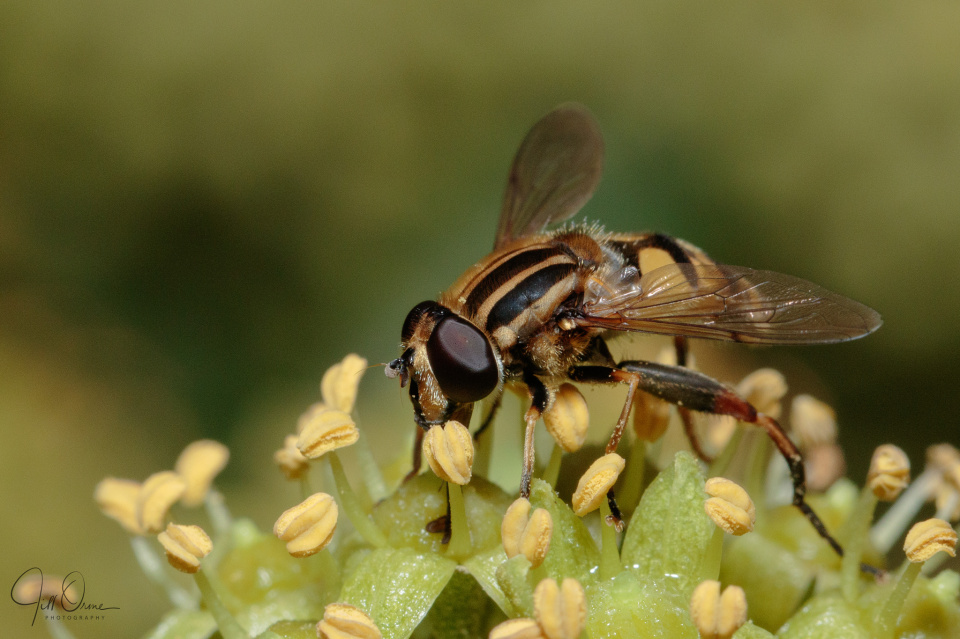 I’ve been photographing Helophilus pendulus hoverflies all summer, mainly patrolling my ponds in search of mates, or resting on the floating leaves of the water fringe, but I think this is the first time I’ve actually seen one feeding. Their apparent lack of interest in food has perplexed me quite a bit: obviously they have to eat, but they’re generally furiously focused on sex, and even when the hemp agrimony was in flower right next to the wildlife pond, and being visited by many other species of insect, I never saw the sun flies give it so much as a glance. All of their competitive mating activity tends to take place in warm sunshine though, and today was very definitely not that kind of day, so perhaps this individual judged that he wouldn’t be missing any (ahem) action if he left the pond for a while, and went off to the nearest ivy clump to load up some calories.

We did have intervals of sunshine during the day, but only as a tease to draw us out of the house, at which point we discovered that it was unseasonably cold, with a slicing wind. It also rained quite a bit, and at one point we had a thunderstorm combined with hail (thunderhailstorm?), which I’ve never actually experienced before. As you’d expect, all this weather made it pretty dark, so when I took advantage of a fine half hour and scuttled off to Tilly’s field in search of insects, I used flash to help me capture some images.

R picked this shot of H. pendulus for my blip, because I couldn’t decide which of today’s photos was my favourite. Another contender, taken at the same ivy clump, is the one I’ve posted to Facebook, of an Eristalis arbustorum hoverfly licking pollen off her foot.