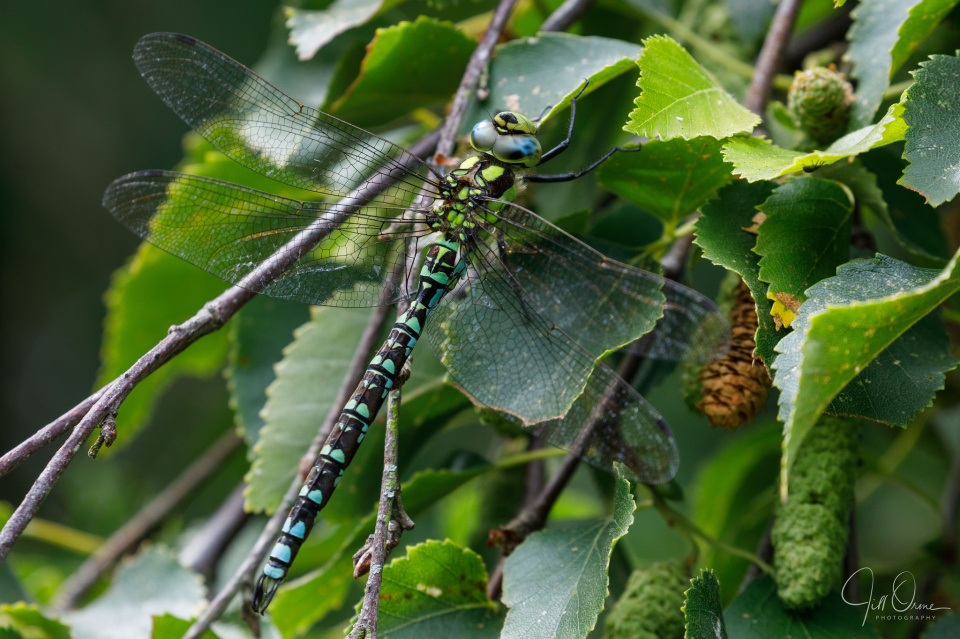 Another day, another Southern Hawker. This one was hunting in our top garden at lunch time, came to rest in one of the birch trees, and (happily for me) stayed there while I fetched my step ladder and climbed up to take his photo. More surprisingly, he perched very patiently while I moved the ladder several times and photographed him from different angles, and when he did eventually fly he went back to circling the same area (and me), and didn’t seem at all fazed by our encounter. The fact that he appears to be completely at home here suggests that he’s one of the young males who’ve been using our garden to complete their maturation, and his glorious colouring shows that he’s now pretty much there.

The most dramatic event of the day happened while R and I were eating dinner this evening, when I glanced out of the kitchen window and saw a cloud of insects flying around the garden. It quickly became obvious that this was a swarm of honey bees, which – alarmingly – followed their queen into the hawthorn tree closest to the house, and settled there. Luckily there is a very active Beekeepers Association at Evesham, and within half an hour of R phoning one of the senior members, he arrived with a portable hive to collect them. Normally this would be done by cutting away the branch around which the bees were clustered, but this swarm had chosen a large limb which would have been difficult to remove, so the apiarist used my dragon ladder to climb up to the bees, held the hive underneath them, and shook the branch hard to dislodge them into the container.

I was extremely dubious about the likely success of this strategy, but that just shows how little I know, because when the beekeeper put the hive down on the lawn the bees that had fallen into it stayed there, and the ones that were flying around began to home in on it and go inside as well. Once he’d treated the tree with some kind of spray to counteract the pheromones the bees had been producing there, the migration into the hive speeded up, and fairly soon after that he went home, leaving R with instructions to close the hive entrance at dusk. Tomorrow morning he’ll come and collect hive and bees, and they’ll be taken to whichever of the 150 members of the Association is currently at the top of the waiting list to receive a colony. We’re very happy that the situation in our garden was dealt with so quickly and efficiently, and surprised and delighted to discover that there’s an active demand for swarms of bees. We hope that this colony like their new home, and that the lucky person appointed to be their custodian enjoys them.