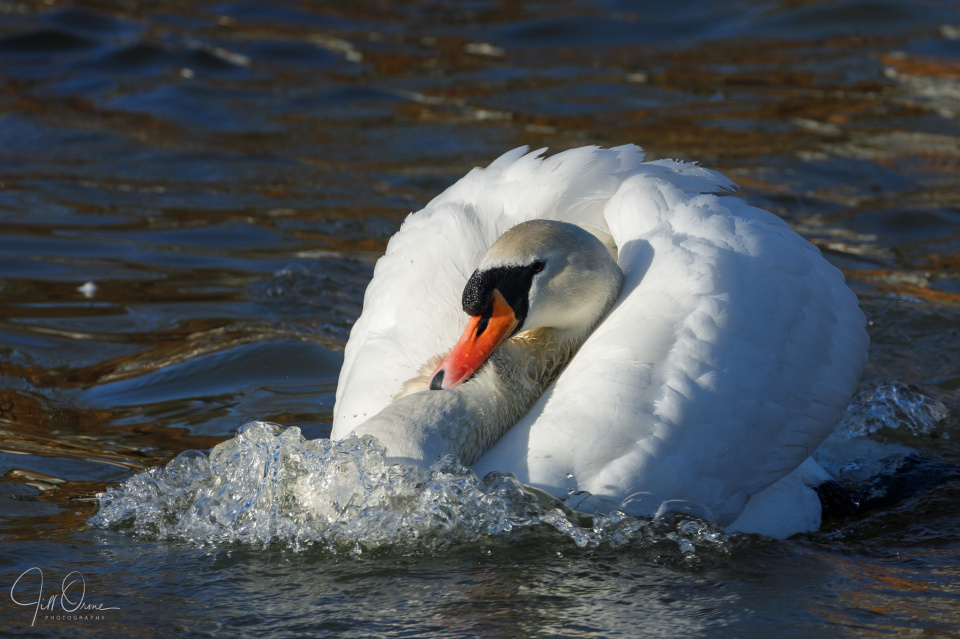 Imagine getting into such a state of rage that you carry on like this, steaming up and down the river in pursuit of a younger male who’s done nothing more offensive than look at you a bit funny. Thank heavens we humans have got our act together now, and settle our disputes in a more –

Anyway, it looks jolly uncomfortable to me: just trying to imagine holding my body in this position makes my back ache. While mute swans are in this state (which I tend to think of as ‘flaring’ because that describes both the position of their wings and the state of their temper) they move quite oddly, with a strong rhythmic surge that tends to create the impressive bow wave you can see here. I haven’t been able to decide if they do this deliberately, to increase the intimidatory effect of their tantrum, or if it’s due to this contorted posture making it hard to move normally. If there’s a swan expert in the house, I’m sure they’ll let me know.

It felt rather strange walking along the river in Stratford on my own this morning, but while I had a legitimate (dental) reason for being in the town R didn’t, so he stayed home and I went alone. This meant that I had no-one to share my excitement at the sudden appearance of a flock of twenty three tufted ducks on the water between the theatre and the Old Tramway Bridge, after a couple of weeks in which the river has been sadly devoid of tufties. They were quite skittish and mobile, so I didn’t take many photos, but I got a lot of pleasure from simply standing for a while and watching their antics.