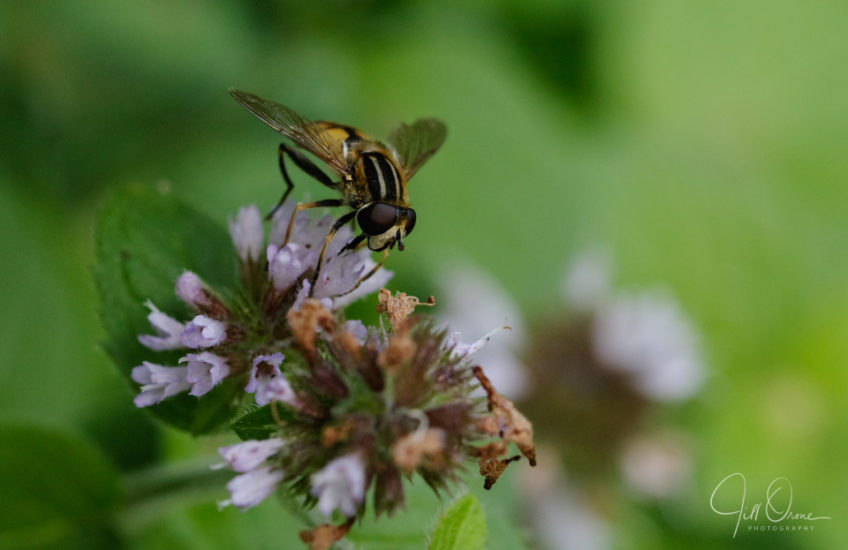 This rather stylish chap is Helophilus pendulus, a harmless hoverfly which mimics a wasp. Helophilus means “marsh-lover”, and refers to the fact that the females of this species lay their eggs in marshy ground, or in rotting vegetation around the edges of ponds. Its common names include “footballer” because of its stripy thorax, and “sun fly” because it apparently prefers sunny weather. This is one of only a few species of hoverfly in which the eyes of both males and females are separated, making it much harder than usual to differentiate them; I’m calling this one “he” because in the next shot in this sequence his abdomen looks to me to be boy-shaped, but I’ll upload the whole lot to UK Hoverflies very shortly, and let the people who know what they’re talking about give a definitive identification.

I have other and clearer shots of this fly basking on fallen leaves out in this afternoon’s bright sunshine, but I like this view of him feeding on what I think might be wild marjoram, or something similar, in a shady area on one side of my neighbour’s pond. I was down there in search of dragons, of course, but didn’t find any at that site today – though I did see several hawkers in other parts of the village during my circuit of the parish, and also managed a single, poor, but still very pleasing record shot of a Common Darter in the butterfly field.

While I was still lurking by the pond hoping for dragon action, I saw something I’ve never witnessed before: two spiders, one with her young on her back, running across the surface of the water to reach a raft of weed and fallen leaves in the middle of the pond, pursued by water boatmen. I wish I’d been able to film this – and get David Attenborough to provide a suitable commentary – but I did manage some still shots, which I’ve posted here.