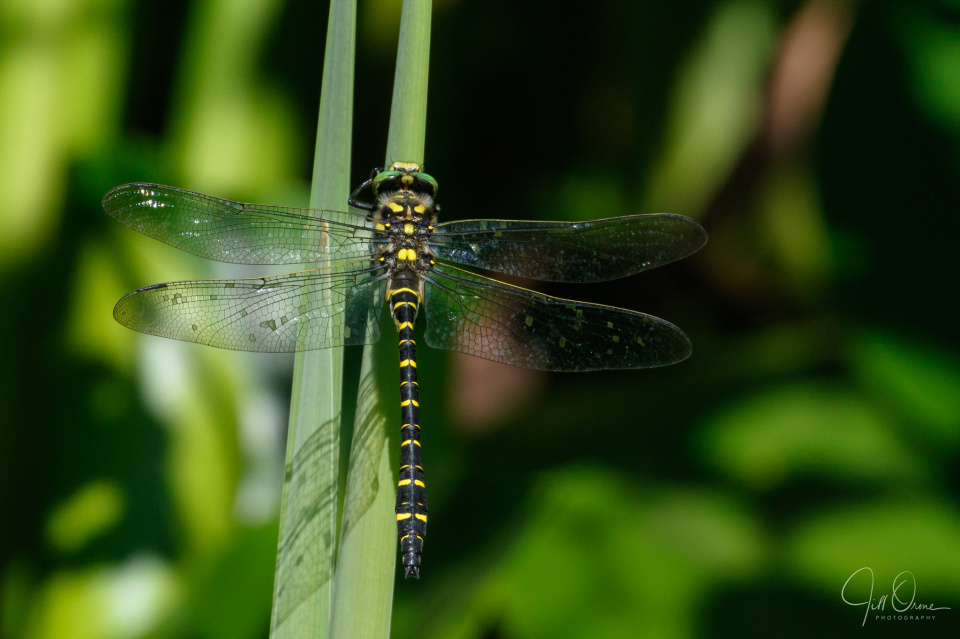 If at first you don’t succeed, try, try, try again. And if the Odonata gods are smiling, on your fourth attempt you might just get a male Golden-ringed Dragonfly, perching for a bit of a rest after zooming back and forth, hunting and bickering with the other dragons along the canal.

R and I went back into Cardiff today to play with Baby B (still snotty, coughy, and sneezy, but coping remarkably well with a situation he can’t possibly understand), and take him for a walk to the park. Afterwards we went to Forest Farm, where for the first time in all of our visits the conditions were dragon-perfect, and then to NT Tredegar. When we got back to Llanishen it was still warm and sunny, and we were able to have a pre-dinner drink at the top of the terraced garden. It was all highly civilised.

The Golden-ringed Dragonfly is one of the UK’s largest species – in fact, the female, which is around half a centimetre longer than the male, is often said to be the biggest dragon we have. It’s primarily a moorland species, breeding in narrow, shallow, slow-flowing, acidic streams with plenty of emergent vegetation. How it came to colonise the Glamorganshire Canal in the middle of Cardiff is a mystery to me, but I’m more than happy that it has. R will be delighted, I’m sure, to hear that the flight season lasts into October, so he can look forward to many more Forest Farm walks.