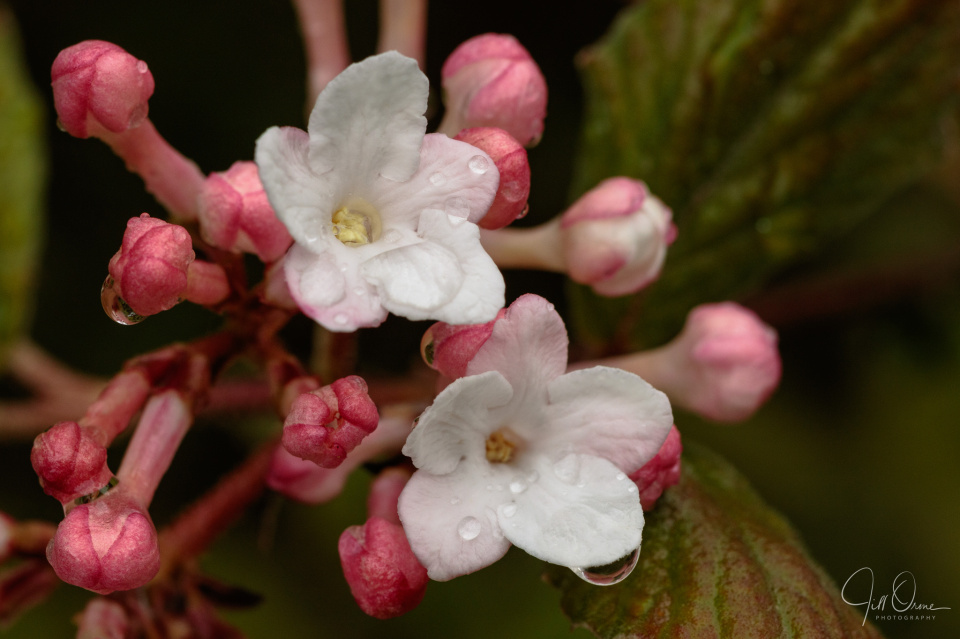 When I woke up this morning it was so dark that I assumed it wasn’t yet time to get up, but it turned out that we were buried under a layer of rain cloud so thick that we’ve had to keep the lights on all day.

“This is as good as it’s going to get,” said R early this afternoon, taking himself off for a wet walk. I didn’t fancy a wet walk myself, but I did need a photo, so I squelched off into the garden, where the Viburnum judii has just come into flower. This is one of those photos that should come with smell-o-vision, because the scent of this shrub is heavenly.

Most bees and flies stay home with their feet up and watch daytime TV in this kind of weather, but the rosemary was humming with female plumpies, all taking advantage of the fact that there were no boys around and getting some uninterrupted foraging done. They were, if anything, even damper than me, but though I tried for a photo they were working at such a furious pace that my lens couldn’t focus fast enough in the gloom, and all I captured were “artistic” blurs.

This evening the rain stopped, and I (briefly) considered going for a walk, but dismissed the idea; ten minutes later I was glad I had, when a thunderstorm blew over the Shire. For the past few days I’ve been saying, “Well, it has been quite dry – to be fair, the garden needed this,” but I think the garden’s fine now, thanks, and what it (and I) could do with for the rest of the week is some warmth and sunshine.