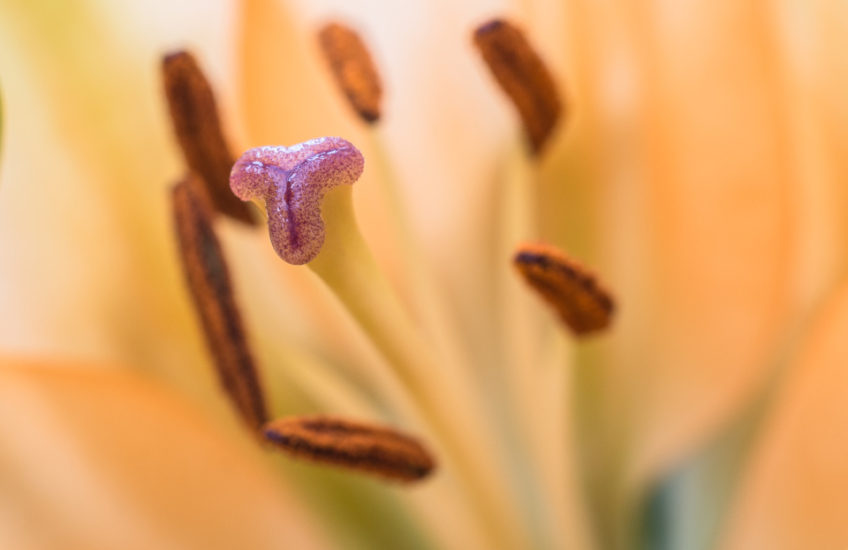 When I photographed this yesterday there was a drop of clear, viscous fluid hanging from the tip of the stigma, which the lily uses to capture pollen grains from visiting insects. I wanted the drop in perfect focus, but it wasn’t. So today I checked that the drop was still there, set up the camera on the tripod in the conservatory, carried the vase of flowers through and set it down in front of the lens – and discovered that the drop had dripped. C’est la vie – at least the focus on the stigma is better.

I’ve spent quite a lot of time today reading the tributes which have been appearing since the announcement this morning of the death of Oliver Sacks, a man I’ve admired for over thirty years. Like many people I came to his work through the fascinating and often poignant case histories in The Man Who Mistook His Wife For a Hat, and I was struck by his unusual combination of scientific detachment and human empathy, as well as by the quality of his prose. I went on to read a number of his other books, of which my favourites are Awakenings and A Leg To Stand On, and I was always happy to see him on television, or to read pieces by him in the Sunday papers.

I know that not everyone admired Dr Sacks – some of his colleagues were infuriated by his populist writings (and I suspect by his celebrity), and one disability rights campaigner described him as “The doctor who mistook his patients for a literary career” – but I think they missed the point, which was that he had a passion to understand, and having understood, to communicate. His understanding increased our understanding, and by removing the ignorance and fear around some neurological syndromes I think that he helped to broaden the perception of “normality”. And although the case histories he described were often extreme, he wrote about them in a way which illuminated aspects of the existence of all of us, and thus helped us to see ourselves more clearly.

Over the past few months Oliver Sacks turned a typically unflinching gaze on his own approaching death, and thus helped to prepare his legions of admirers for what was to come. Two of his last pieces appeared in the New York Times in February and July, and just two weeks ago he meditated on the Sabbath:

“And now, weak, short of breath, my once-firm muscles melted away by cancer, I find my thoughts, increasingly, not on the supernatural or spiritual, but on what is meant by living a good and worthwhile life — achieving a sense of peace within oneself. I find my thoughts drifting to the Sabbath, the day of rest, the seventh day of the week, and perhaps the seventh day of one’s life as well, when one can feel that one’s work is done, and one may, in good conscience, rest.”

Nonetheless, reading the news first thing this morning was a shock, and I wept – not for him, really, because it seemed that he had made his peace with death before it reached him, but for the loss of his mind, and his humour, and his humanity. It seems to me that he was one of the good guys – and the world doesn’t have enough of those that it can easily spare one.

There are two nice tributes – in the New York Times here, and in The Atlantic here. And Dr Sacks’ lover and partner, the writer and photographer Bill Hayes, has put a lovely scrolling marquee of images of him at work and play on the home page of his web site.