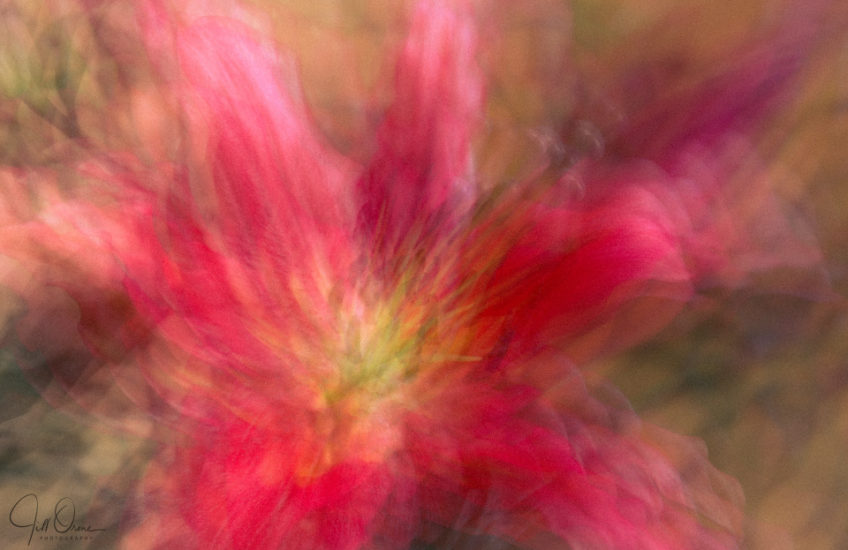 I can’t seem to shake the cold I’ve had since last week – probably because of the medication I have to take to keep arthritis in check – and although I wanted to get out today with the camera I just didn’t feel up to it. Instead I thought I’d apply a version of the Pep Ventosa technique to one of the amazing deep red stargazer lilies we bought last weekend, and which are now beginning to open.

I took a couple of dozen hand-held frames, discarded the ones that didn’t seem to have anything much to offer, and then took the remaining fifteen into Photoshop. For my first attempt I tried to roughly align them, but I didn’t like the resulting mash, which R described as “neither one thing nor the other” – it fell between realism and abstraction in a way that was really quite unattractive.

So then I started over, but this time the only fiddling around I did was to decide which would be my first and last frames and to move those to the bottom and top of the stack. Other than that I did no alignment, and no tweaking of blend modes: everything was blended on Normal, with the opacity decreasing regularly from the 50% I’d used for layer 2, down to 5% for level 14. The top layer, which was a similar image to the first one, was blended at about 15% to emphasize the form of the flower. This whole process took a maximum of 10 minutes.

Back in Lightroom I discovered that the composite image was quite dull, with a low dynamic range, so I spent a while tweaking the tone curve and the three colour channels until both my eye and the histogram were happier – but that was just playing, and doesn’t really count as editing time! As a final touch I applied quite heavy grain, to make the image look even less realistic.

I had this ready to post by dinner time, but set it on one side for a few hours because R and I were going out (me coughing and snuffling, with a scarf wound several times round my face). We’ve been to The Regal in Evesham to see the new Blade Runner – which is, I think, one of the most visually stunning films I’ve ever seen (there were some effects that made me think something like that would make a very interesting still photo), but whose plot really doesn’t bear too close examination. Not that you ever really go to this kind of film for the plot – but I do feel that the story should at least hang together in terms of its own internal logic, and this had too many bits that made you think Hang on! How did…?, or Wait! That doesn’t make sense! Maybe if I saw it again it would hang together better, but that would be another evening of my life I’d never get back. Don’t let me put you off though, if you haven’t seen it and were thinking of going – I actually did enjoy it, but I’d recommend checking your critical faculties at the door, and just riding the wave of nonsense.