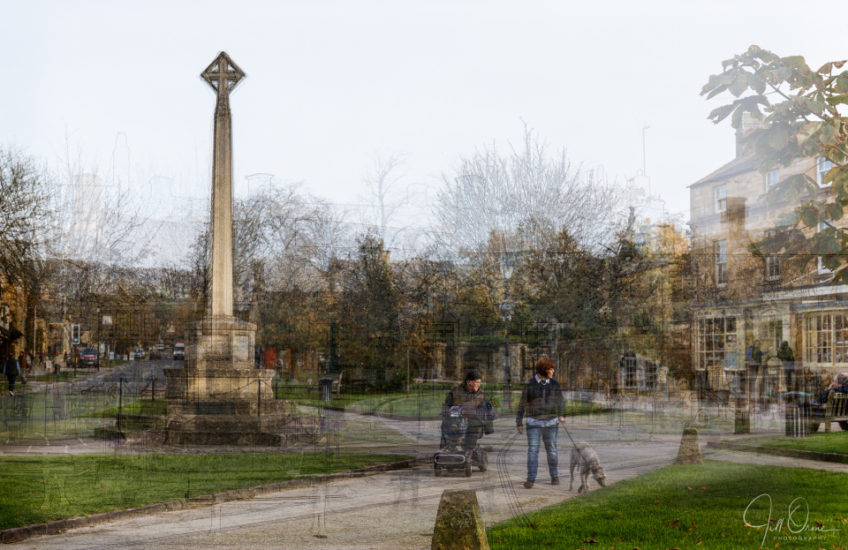 This is the village green at Broadway, photographed “in the round” when R and I popped over for coffee (and, I confess, cake) at lunch time today. I wound up going twice around the war memorial, because just as I was setting up my composition a woman in a huge car came and parked illegally right next to it, almost running me down in the process; R suggested that I should take my shots anyway and try to clone out the car later, which I grumpily did, but when I got back to my starting point I discovered that she’d gone, so I made another circuit. I’d already been twice around a tree a little further up the street, and by this stage a few people were starting to look at me in a rather sideways manner, so we called it a day and came home.

Processing-wise, I used the Find Edges filter on several of my layers; turning them into linear representations meant that I could try to represent all the buildings around the green without losing too much of the base image. I may have overused the effect a little, but I do quite like the way this has turned out. There was also much faffing with opacity and blending modes: Hard Light seemed to work well here, but I also used Linear Burn a couple of times.

Other than Photoshop fartnarklery and cake, the day has involved some financial stuff (including submitting my cashback claim to Canon, which I’m happy to say they accepted within half an hour of me uploading the form), a brisk walk (because cake), and choir. Finzi….. sheesh…..