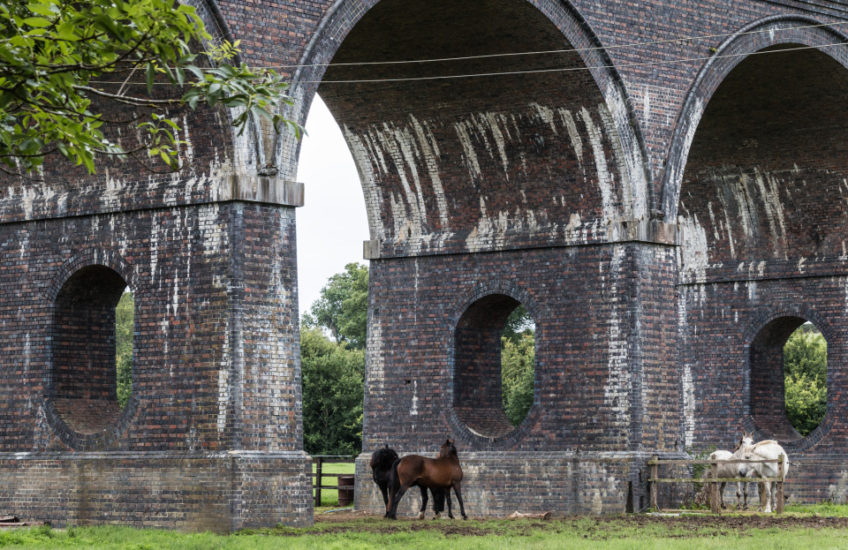 Stanway is a 15-span viaduct on the Gloucestershire & Warwickshire Railway, which is a heritage railway running from Toddington Station north to Laverton Halt (just a short distance north of the viaduct) and south through the lovely market town of Winchcombe to Cheltenham Racecourse.

The original British Rail service on this route (which is known as the Honeybourne Line) closed in 1968, and a few years later the track was lifted and removed; but volunteers campaigned for the right to reopen it and raised funds to buy the land and all the necessary track, equipment and rolling stock. The first short section reopened in 1984, and it has gradually been extended over the intervening years. Funds have now been raised to repair five bridges which will allow the line to be extended north between Laverton and Broadway, and there are active plans to take it as far as Honeybourne – which would be appropriate given the name of the line. Many people hope that in time the service will go all the way through to Stratford-upon-Avon, though others are against this proposal because much of the old railway bed around Stratford is now in use as a Greenway.

I had hoped to be able to take one of those dramatic shots through the arches of the viaduct – if you don’t know what I mean, take a look at this one by Skeena – but when I reached it I discovered that the land to either side of the span through which the public footpath runs is very overgrown with elder and brambles, which sadly spoils the view. I’ve put up a couple of shots here and here which will show you what I mean.

This shot gives the best sense of the size of the structure – and the idea that if one could but get into the horse field without trespassing (and possibly carrying a step ladder), a great view is waiting there to be photographed.  I was standing contemplating this thought when the horses, which had till then only had eyes for each other, suddenly all turned and looked at me as if to say “Dont’t even try.”

As I was about to get back in the car I heard a train horn, and whisked back to the field gate just in time to catch the southbound train crossing the viaduct. What excitement! Another day I might just ride the train, which goes through some lovely countryside and passes several stately homes – as well as going through a 693-yard tunnel, which may not be the most photogenic part of the line.