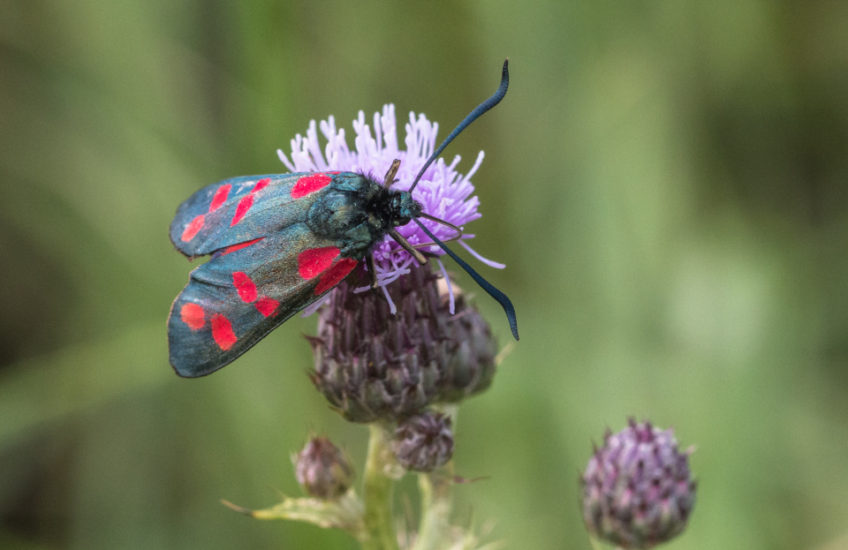 It was a lovely day today, but I was feeling a bit offish – so instead of doing useful things I went on a bug safari round the village. I was out for about two hours, and came back with 251 shots, most of them taken in the butterfly field. There were a lot of Meadow Browns, Ringlets, Marbled Whites and Small Skippers – though puzzlingly I didn’t manage to find a single Large Skipper – and also several species of bee and some nice hoverflies. Thick-legged Flower Beetles are out in force at the moment, and suddenly the place is also teeming with Common Red Soldier Beetles.

I’ve been watching for three particular types of wild flower to come into bloom: thistle, knapweed and ragwort are all very attractive to bugs, and this field contains an abundance of all of them. Today a few of the thistles had opened, and they were being furiously competed over by the Marbled Whites and Skippers, as well as some of the bees; I find it interesting that although they look so delicate, some butterflies are actually quite feisty, and individuals of both these species were trying to hold their ground on the thistle heads, against other butterflies and even against incoming honeybees. They show their irritation at interlopers by rapidly opening and closing their wings – sometimes this works, and the contender veers away to another flower, but a determined honeybee will usually just zoom in at speed and physically barge the occupier off its perch.

I was standing fascinated, watching a series of these encounters on a large thistle plant to one side of the path, and then I happened to glance to the other side and did one of those cartoon things with my eyes leaping out of my head on springs: this Six-spot Burnet moth was calmly grazing another thistle head, ignored and unmolested by everything except some tiny brown flies, which it was ignoring. This spectacular moth has been on my target list since last year, along with the black and red Cinnabar moth which lays its eggs on ragwort, but though I found and photographed some Cinnabar caterpillars last summer and have seen adults of both species  on the wing, this is the first time I’ve ever found an adult feeding. I took several dozen shots of it while it slowly and systematically browsed the entire thistle head; I was sure that at some point it would finish its meal and those extraordinary wings would spread, and I really wanted to capture the moment – but I was having to lean at a difficult angle to get my shots and my back gave out before the moth’s appetite, so it was still there when I left.

You won’t be surprised in the circumstances that the Six-spot Burnet is my featured image today – but it’s possible that you might agree with R that the Common Blue Damselfly I’ve added as an extra is actually a better shot. He said it made him think of Secessionist designs – which from R is high praise – and had I not come across the moth I’m certain I’d have been crowing about finding a damselfly in this meadow, several hundred yards away from the nearest water course. But – you know – Six Spot Burnet…! 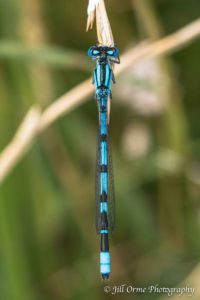