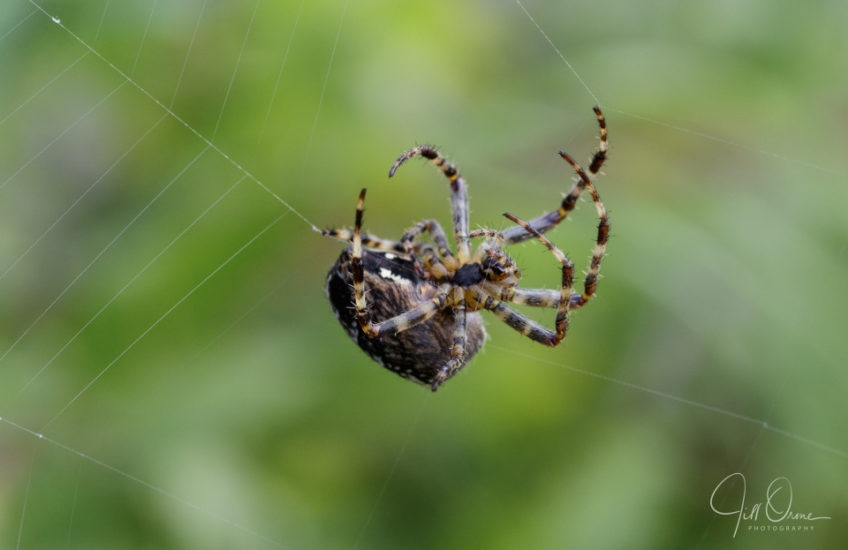 The interface between ballet and knitting…

I’ve had several requests to stop posting photos of spiders. My various responses:

But they’re so beautiful!

You do know we don’t have a single spider in this country that’s dangerous to humans…?

You can just decide to stop being scared of them, you know.

They’re far more vulnerable than you, and much more frightened of you than you are of them!

…all seem to fall on entirely deaf ears. I can just about empathise – but only by imagining this to be the size of a Jack Russell terrier.

Oh sorry – did that not help?

OK. How about trying some habituation therapy: look at this full-screen, and concentrate on how clever it is that she can use the tiny pincers at the end of each leg independently, to construct her web. I’d probably take up knitting again if I could work four pairs of needles at the same time!

I took the main shot of this garden spider at around noon, when I was leaving the house to go on a bug hunt. She was absolutely horrified by the attention, and fled to the rowan tree which is anchoring one side of the web, where she crouched defensively and waited for me to either pounce or decide to leave her alone. I did the latter. Two hours later, on my way back through the garden, I glanced at the web and saw that she’d been busy while I was out (please see the extra); I do feel a little sorry for the wasp, but it was probably coming to the end of its life anyway. 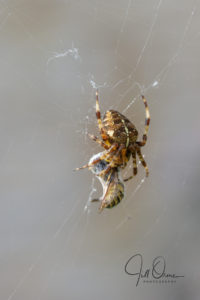 Because I’m nicer than you currently think I am, I decided against giving you a second extra of a different garden spider slurping the juicy bits out of a ladybird… but for those who aren’t arachnophobic, it’s here.