What on earth is happening with the weather? Forgive me if I’m sounding like one of those tedious people who think that everything was better forty years ago, but I’m certain the seasons used to be more predictable than this. A couple of days ago I was gardening in my shirt sleeves, and photographing more bugs than I could shake a stick at, and today my wake-up call from R was “Huge snow flakes!”

I’m sure he found my reaction gratifying (though probably less so than the day he quietly said from just behind my drowsing head “The bat is in the room” – a story I’ll tell you properly one day, if you’re good). I leaped from under the duvet, flung on my dressing gown, grabbed the camera and shot downstairs like a half-asleep middle-aged woman in a floor-length dressing gown carrying a heavy camera, threw open the back door and took the shot I’ve put in as an extra. And then rapidly shut the door again: it was bitter. 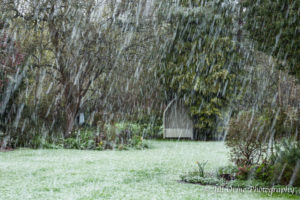 It was Arthur’s bath morning, so we went off to Stratford first thing, with me yelling “Stop, stop!!” at intervals so I could get out of the car and take photos. R was really very patient, and even detoured via the foot of Meon Hill for me to take this view; a 90mm macro lens isn’t absolutely ideal for shooting a landscape at close quarters, so this is a panorama of six portrait shots, stitched in Lightroom. I’ve driven myself round the bend this evening, trying to decide between this version and a mono conversion I created in McPhun tonality – in the end I went with colour because it gives a slightly better sense of how misty it was on Meon this morning, but I do really like the mono, so I’ve put it on my Panoramas page.

By the time we’d dropped Arthur at the groomer’s and indulged ourselves with coffee and cake, the sky had cleared and the sun was out – if you also know me on Facebook you may well have seen half a dozen shots I’ve posted there of activity down at the River Avon, which give no indication at all of the weather we’d woken up to. By late morning the only remaining snow was a thin band up on the Cotswold Edge (where it’s normally several degrees colder than anywhere else in the area), and by this afternoon our little valley had warmed up just enough for some of the braver bees to re-emerge.

But not me – I’m much too old to be playing out in this kind of weather. Normal bug photo service will resume when the temperature returns to something I find acceptable.