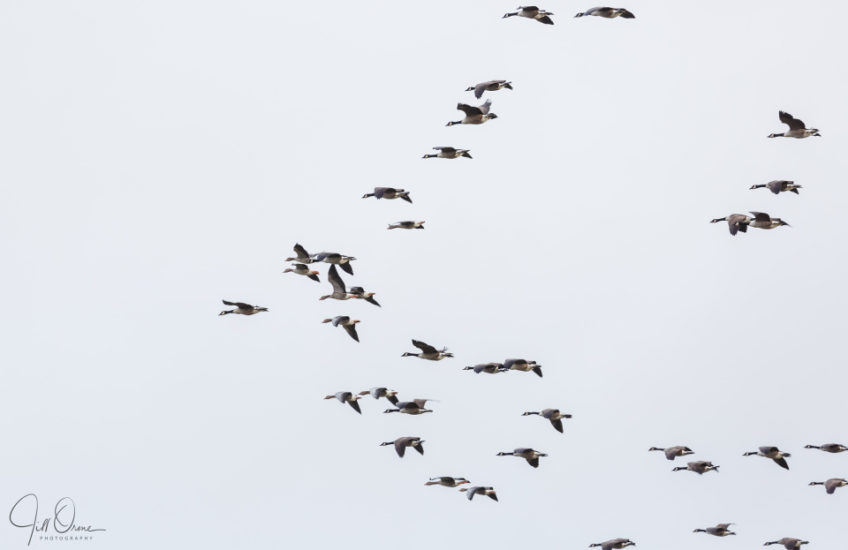 I’ve researched the term, so you didn’t have to, but I’m afraid I still don’t know why a group of geese flying is called a skein – unless they’re flying in a V formation (which these almost were, to be honest), in which case they’re called a wedge. A group of geese on the ground is a gaggle, of course, or possibly a nide; and a group on water is apparently a plump.

Collective nouns are quaintly fascinating, I think – and I’m clearly not alone, because I regularly see little informal contests on Twitter to come up with a name for a group of politicians, or Brexiters, or rock musicians, or journalists. There are lots of web sites which have lists of collectives nouns, but for birds this is the nicest one I’ve found.

R and I were in Stratford to buy new smoke alarms, after I came across this report, and R discovered that holding a smoking candle underneath two of our three alarms elicited no response at all. We’d just got out of the car when I heard the unmistakeable sound of approaching geese, and a group of at least a hundred flew eastwards along the river. Most of them were Canada geese, but there do seem to be a few greylags in this photo as well – though that may not actually be the case, because we also get feral domesticated geese here, which start out looking like greylags but then gradually lose their markings until they’re entirely white. By the time R and I had done errands and coffee and were walking back carwards along the river, the entire plump was down on the water around the island between the Clopton and Old Tramway Bridges.