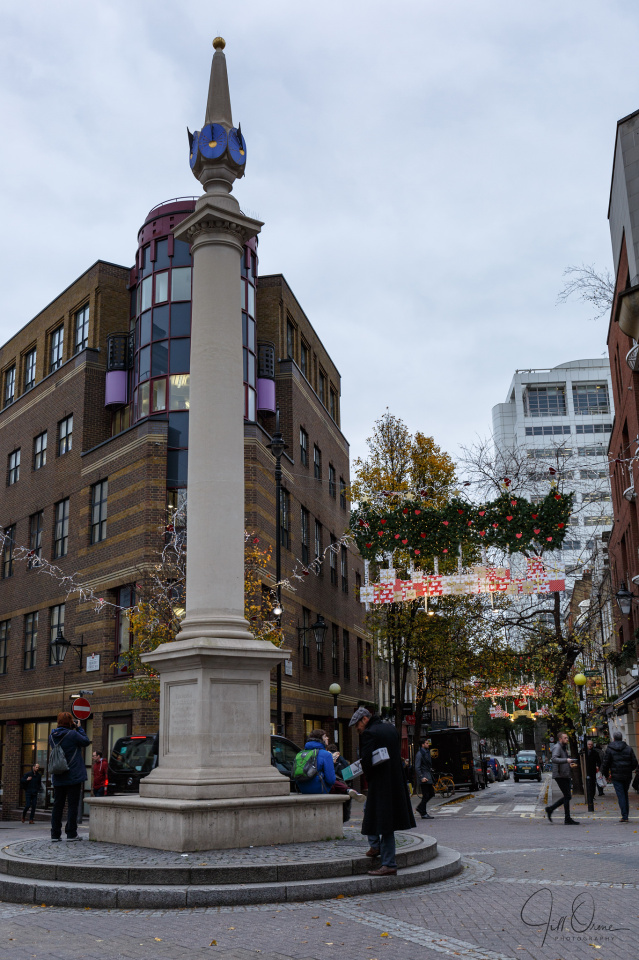 R and I were in London again today, where (due to a series of incompetences with which I won’t bore you) this was the only half-decent photo I took. Luckily I quite like it, not least because it reminds me of my youth.

This junction of seven roads is called Seven Dials after the sun dials on the column which originally stood at its centre (the current column being a modern replica); the name then became attached to the surrounding neighbourhood, which lies just to the north of Covent Garden and the theatre district. The area was developed in the 1690s by Thomas Neale, who had a vision of an affluent residential area, and designed a network of roads dividing wedge-shaped blocks in order to maximise rents – at that time charged by the area of road frontage rather than per square foot of room space. But the wealthy people of London didn’t take to Seven Dials, and over time it deteriorated into a notorious slum.

When I moved to London in 1980 the Covent Garden Piazza had already been redeveloped and was recognisably the chic tourist attraction it is today; but Seven Dials, though no longer dangerous, was still very run down and quite raffish. It did have some very interesting shops though, including one which was almost literally a life-preserver for someone trying to survive in the capital on book trade wages: in the block that lies north-east of this junction is a courtyard called Neals Yard, enclosed by warehouses which formerly served the Covent Garden fruit and vegetable market, and one of these had been roughly converted to a huge wholefood warehouse. I can’t tell you how exciting it was to explore this fascinating and fragrant store, which sold dry goods such as grains and pulses in any weight you were able to carry away, but also more exotic things – herbs and spices, oils, nuts, dried fruits, different kinds of honey and other syrups, herbal teas, trail mix and Bombay mix, carob, halva ….. and the best thing about it was that it was all affordable. As well as the wholefood warehouse there was a fabulous bakery in Neals Yard, a dairy that sold lovely but expensive cheese, and an apothecary – the original home of the now widely-available Neals Yard remedies. I worked on the western edge of the City of London, but would regularly yomp over to Seven Dials in my lunch hour to stock up on groceries and bread, and if I was richer than usual maybe some cheese too. R still occasionally mentions bumping into me one day as I sashayed round the Aldwych in a tight skirt and three-inch heels – I wish I’d known at the time how much of an impression I made!

I made an impression of a different kind in Seven Dials when I took my sister to the Donmar Warehouse in 1982 to see Anton Lesser in Jonathan Miller’s production of Hamlet. The Donmar was – and maybe still is for all I know – very small and shabby, being a conversion of an old hop warehouse; in 1982 it had only been open for a few years, and the facilities were about as basic as you can imagine: rough wooden benches set around a central stage, no foyer or mingling area of any kind, and signs nailed around the walls at intervals stating that if any patrons felt the need to use the loos during the performance, they should please leave them unflushed because the sound carried straight into the auditorium. Unfortunately K and I had come to the theatre from a nearly cocktail bar (it being her birthday), and were very severely lubricated, and when during the seemingly almost interminable production I did need to go to the loo, I forgot the warning, and flushed…. and then had to do the walk of shame back to our bench past a couple of hundred stony faces, including Mr Lesser’s. When, about a quarter of a century later, I found myself in conversation with him as a result of the fact that I was chaperoning the juvenile cast of a play in which his daughter was performing, I was extremely relieved that he appeared not to remember our previous encounter.

There’s more about Seven Dials here and here, and a blog about the sun dials here.