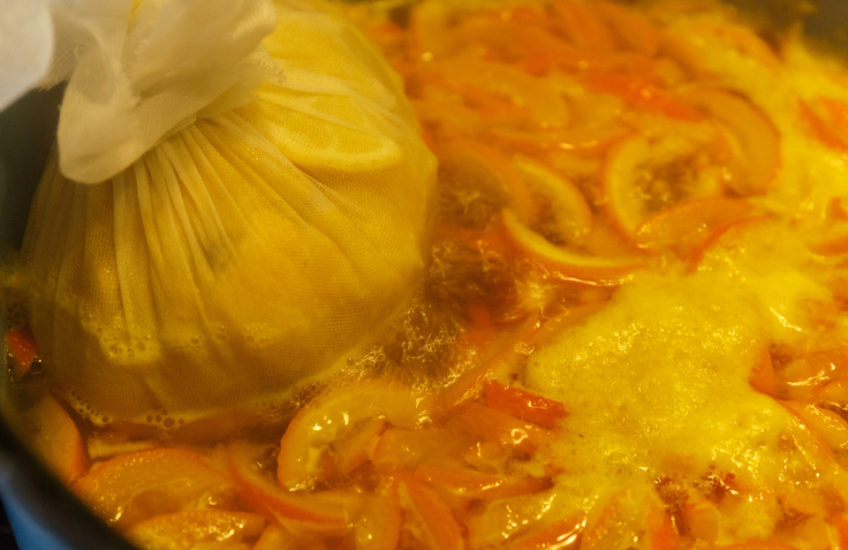 Don’t worry – I’m not about to go off on on one. Although I did spend most of this morning sitting at my desk watching one on line news report after another, and winding myself up like a watch spring. The fact that there wasn’t an unseemly incident, in which small bits of my inner workings exploded out of my ears with a pinging noise, can be attributed to the fact that low blood pressure provides my springs with quite a lot of natural slack.

When eventually I dragged myself away from the screen and went to look for something useful to do, I discovered that it was raining; so I crossed gardening off the afternoon’s list, and made marmalade instead. This is the peel softening stage, which involves two hours of simmering – a fairly loose term which yet has to be quite precisely interpreted. If your peel isn’t boiling enough it won’t soften properly, and the mixture will still be very wet when you add the sugar; this can cause trouble with the set. On the other hand, if your peel is boiling too quickly and you go away and leave it, you’re quite likely to come back and find that it’s burning on the bottom of the pan. I like mine to be gently seething around the muslin bag containing all the gubbins* – which is what is happening here.

* Pith and pips from the oranges, along with a roughly-chopped lemon for extra flavour and pectin. At the end of this stage you squeeze as much gunk out of this bag as you can, without (ideally) actually bursting it open and dumping a load of gubbins into the marmalade. This would Not Be a Good Plan.