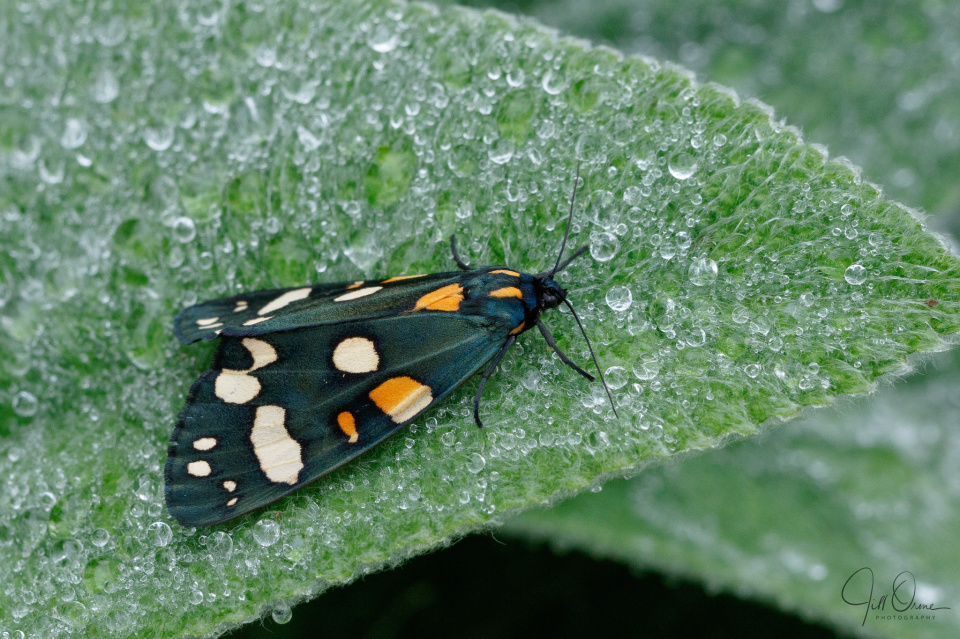 While R and I were tidying the garden yesterday afternoon I pulled up a prickly sow thistle from the back of the front border, and as I threw it onto the wheelbarrow I realised that there were a copulating pair of Scarlet Tigers on one of the leaves. Apologising profusely for having interrupted their tender moment, I moved them onto a stachys leaf (much more comfortable!), photographed them in flagrante, and then left them to it and went on with my work. Several hours later they were still in the same place and still coupled, and I began to worry that I’d damaged them in some way, but this morning they were both sitting calmly on different leaves of the same plant. It rained heavily overnight, as you can see from the moisture on this leaf, but the moths themselves appeared quite dry, so I think they must have taken shelter during the downpour.

I first found Scarlet Tiger caterpillars in the garden three years ago, and each year since then a few adult moths have turned up in the same small area of the front border. They’re not at all rare, but they do seem to be patchily distributed across their strongholds of south west England and south Wales, so I’m always pleased to see them. Their preferred larval foodplant is comfrey, which I don’t have (memo to self: get some comfrey), but they’re not especially choosy and will eat quite a wide range of plants including nettle, bramble, and honeysuckle. In our garden they seen to have developed a taste for forget-me-nots.