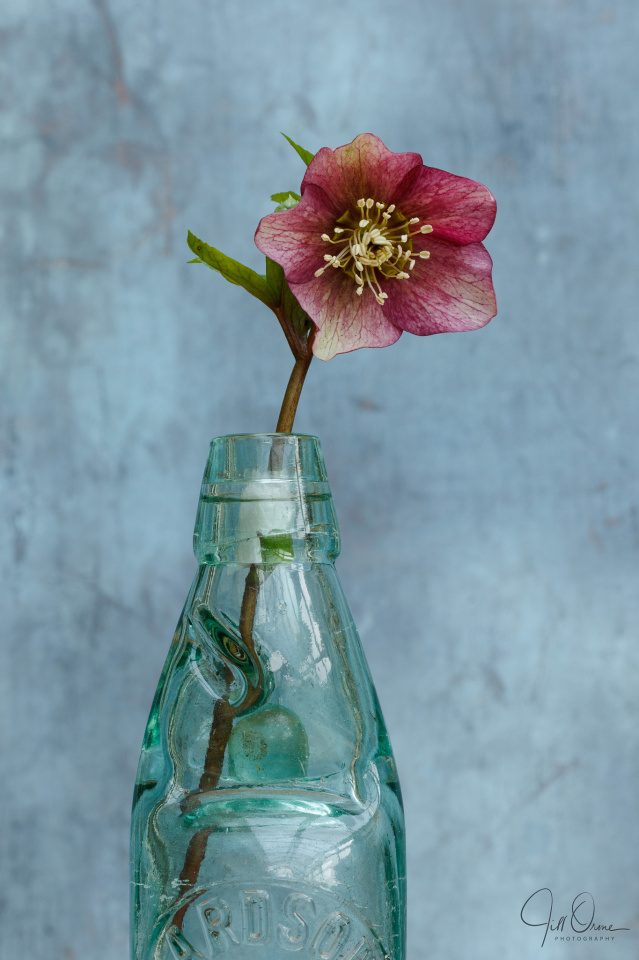 A dark and dank day, slightly misty, and though there were plenty of birds in the garden eating the food I’d put out, there really wasn’t enough light to capture them by. My mood had lowered with the light, and I struggled even to get myself dressed and moving this morning.

Eventually I shook myself into action, took the macro, and braved the garden in search of a subject, but the only thing I liked was this hellebore, which appeared to be in a similar mood to my own: it drooped towards the soil in spite of all my attempts to prop it up and persuade it to face the camera. Even if I’d been prepared to get down onto the wet ground, I couldn’t have photographed it in situ without first digging a trench to lie in, so in the end I (guiltily) picked it and brought it indoors. In my defence, there are no pollinating insects in the garden at the moment, so I wasn’t depriving a bee or a hoverfly of vital food.

I bought this slightly Oriental-looking backdrop at the turn of the year with an image in my head of boughs of spring blossom, and I’m sure it will reappear when they do, but of the four I tried behind the hellebore today it was the one that worked most effectively. This was a little surprising because the old codd bottle is quite a bright green glass, but the blue of the backdrop dampens it, while the pink accents tie nicely with the pink petals.

The two most interesting things I read this morning while slumped in my desk chair were this unpicking of he AstraZeneca vaccine row; and this account by a doctor of working on the front line of the NHS response to the pandemic. I’d advise having tissues to hand before tackling the latter: by the time I reached the end I could barely read for weeping.