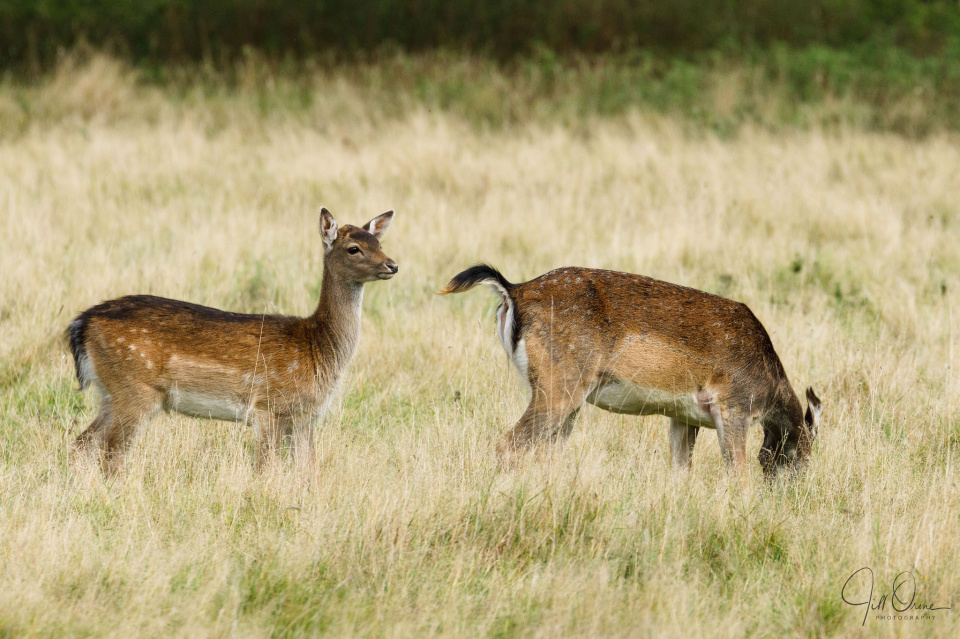 Well, they weren’t really running – strolling away would be more accurate.

I popped back to Charlecote this morning, where the rut is now just about kicking off. I didn’t see any fighting, though I met someone who said he’d had a pair of sparring youngsters come uncomfortably close to him, but there was lots of stomping about and bellowing, and I did witness one of the alpha bucks repeatedly mounting a flirty young doe; it wasn’t a pretty sight, though, and I thought I’d spare your blushes.

Most of the herd is currently in the West Park, but in the smaller Front Park, close to the house, one of the big old bucks that I remember from previous years has gathered a small group of does and is trying to keep them to himself. When I first arrived he was chasing yearling males out of the group, and generally looking like a boss, but by the time I’d walked my circuit and was making my way towards the exit he seemed to be struggling to keep any kind of discipline within his harem. None of the does looked at all interested in him, despite all his grunting and snuffling, and even the fawns were apparently unimpressed. Every now and then one or two of them would start to wander away towards the West Park, and he’d have to fetch them back – which is what was happening here. I’m afraid I can only give him Alpha Minus for today’s performance – he’ll need to up his game if he’s going to breed this year.

I’ve chosen this image for today’s post because I was so taken by this little male fawn, following his mother as she wandered away from Alpha Minus. The fact that the fawns are still with the does is a sign that the rut isn’t yet in full swing: when the does come into oestrous the females only really have eyes for the bucks, and the youngsters, temporarily orphaned, join into little gangs and hang out with the yearlings, until the hormone levels of the adults drop and life goes back to normal.