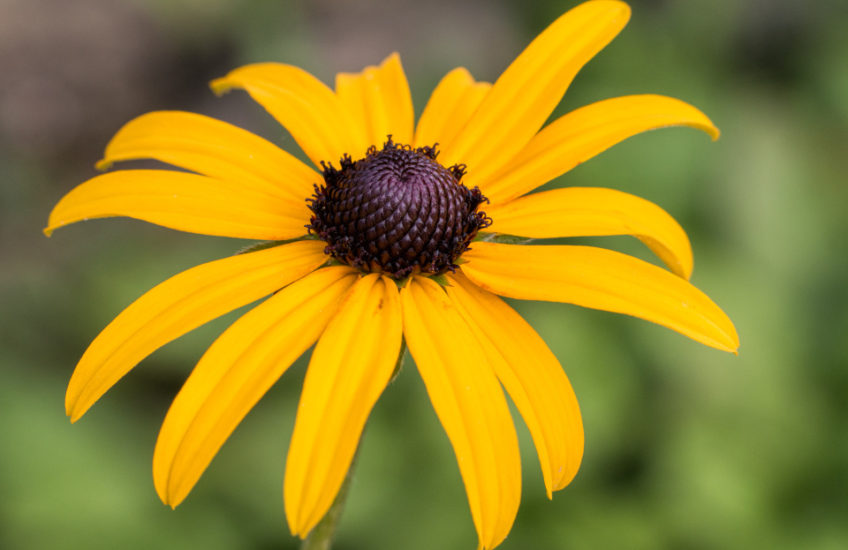 I finally managed to get a reasonable photo today of Rudbeckia ‘Goldsturm’ – I’ve never had much success with rudbeckias before, but this one is looking quite sturdy and I think it may take. It certainly adds some zing to the front garden.

The extra shows Arthur modelling his autumn wardrobe. Poor Arfie! He has spent years channelling his inner Dorothy Parker, and this is his best “What fresh hell is this?” expression. 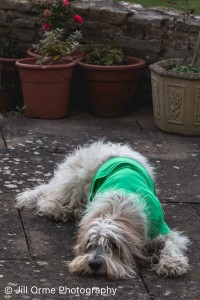 The problem is that although the main section of his surgical incision has healed well, there’s one small place which is still problematic, and at every possible opportunity he tries to help it along by licking it – which of course leaves it in a worse rather than a better state. I’m loath to take him back to the vet if I can avoid it – he literally shook like a jelly on a plate the whole way there when we went to have the stitches taken out last Monday – so I’ve been bathing it with saline and using small dabs of antiseptic on it, and we’ve kept him in the Cone of Shame to stop him reaching it. But given that it’s 17 days since the surgery, and he was coned for the preceding week as well, he’s now been wearing the thing for three and a half weeks, and really has had enough – and we’ve had enough of seeing him so miserable. So in the silent, sleepless, worrying watches of last night I decided that we’d try the vet’s alternative suggestion of a toddler t-shirt.

I bought this lovely garment in H&M in Stratford this morning while the dogs were at the groomer’s, and back at home R helped me to lever him into it. His face was an absolute picture of bemusement – but so far, I would say that he prefers it to the cone, because he can move around without crashing into things, and sleep in his basket without his head and neck being pushed into awkward positions. I have a slight suspicion that he spent the evening plotting what he’d get up to once we left him alone for the night, and that I might go down in the morning and find it in shreds – but if he doesn’t live down to my expectations I’m cautiously hopeful that this might solve our problem.